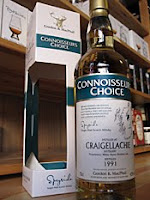 Craigellachie is located in the heart of the Speyside whisky region in Scotland. It can be found on the edge of the village of the same name and sits at the point where the River Spey and River Fiddich join. Craigellachie was founded in 1891 by Alexander Edward and Peter Mackie, and they commissioned the reknowned architect Charles Doig to design and construct it. The most famous feature of his design at the distillery are the huge floor to ceiling windows of the stillroom. Problems with the construction and cashflow meant that the distillery did not start production until 1898.

Peter Mackie started his own company, Mackie & Company Distillers, and they took sole charge of Craigellachie in 1916. In 1924 the company name was changed to White Horse Distillers following Mackie’s death. White Horse later became part of the large Distillers Company Limited group, although the name remains as one of the best selling blended whiskies in the world. The current owners are John Dewar’s & Sons, who in turn are part of the Bacardi Group. They use much of the 3.5 million litres of spirit produced at Craigellachie each year in their popular range of Dewar’s blended whiskies. As a result, only a tiny percentage is released as single malt and even this (a 14 years old) is rare.

This bottling of Craigellachie has been matured in bourbon casks and the colour is golden yellow. The nose is sweet and grainy with lots of malted barley and vanilla present. There is also some fruit (think of sultanas especially), toffee, some toasted nuts (imagine almonds) and a hint of dried grass or hay. It is an intriguing and pleasant nose that makes you want to sit a continue taking in the aromas. On the palate, this feels rich and creamy with the vanilla, toffee and toasted nut elements particularly prominent. These are joined some sweetness - the fruit and grains from the nose - some honey, some dry woody spice (imagine cinnamon bark) and a slightly odd hint of menthol eucalyptus and that dried grassy note. The finish is fairly short with the sweetness turning drier and woodier towards the end. This is a lovely whisky that is rich, sweet and spicy but with that interesting menthol-like twist. It should be tried to if the opportunity arises and offers very good value for money, especially when considering that it is an 18 years old single malt from a little known distillery. A lovely dram.
posted by Matt C at 9:46 PM