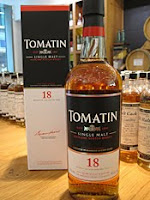 Tomatin is a whisky distillery that is located to the south of Inverness, the capital of the Highlands. OK technically, it is a Highland whisky but we were in Inverness on our recent trip and had the chance to try some. Tomatin was founded as the Tomatin Spey distillery in 1897 by a group of Inverness businessman. It was renamed as Tomatin in 1909, after a nearby village, and the distillery enjoyed a highly successful period. This was especially true in a period between the mid 1950s and the mid 1970s, when Tomatin was expanded on numerous occasions to finish in 1974 with 23 stills and a massive production capacity of 12 million litres per year.

This success made Tomatin Scotland's largest distillery, ahead of Glenfiddich. The success couldn't be sustained and it went into liquidation in the mid 1980s. In 1986, Tomatin was bought and production restarted by two Japanese companies - Takara Shuzo and Okuru & Co. Ltd. This made it the first Scottish whisky distillery to be owned by the Japanese. Both companies are now part of the larger Marubeni Europe plc.

Tomatin is little known despite still being one of Scotland's largest with an annual production capacity of just over five million litres. The distillery has been downsized with 11 of the stills removed in 2002. The reason for this is that the majority of the spirit produced at Tomatin is used by blenders to create numerous blended whiskies, including the well reknowned Antiquary. This leaves little to be to be released as single malts. The current owners have just expanded the core range by adding this 15 years old and this new version of the 18 years old to the 12 and 25 years old. These are occasionally joined by limited edition bottlings and Tomatin is also popular with the independent bottling companies. 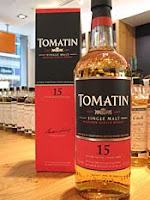 Tomatin 15 years old
This new addition to the core range from the Tomatin distillery is matured in ex-bourbon casks. The colour is golden and the nose is pleasant and full of the classic bourbon cask characteristics - vanilla, oak, toffee, cereal grains and a touch of warm spice (think of ginger). On the palate, this has a lovely softness and a buttery quality. The vanilla and oaky woodiness are particularly prominent with the toffee, sweet cereals and spice coming through well. There is also a nutty element (imagine a creamy type of nut like hazelnut). The finish has a delicate feel and is sweet and malty. This is a lovely dram that is quite straight forward but very enjoyable. £35-40 a bottle.

Tomatin 18 years old
This is a new version that replaces the old 18 years old in the Tomatin single malt range. The difference is that this new 18 years old has had some part maturation in sherry casks. The evidence of this can be seen and noted in the colour (golden amber) and on the nose, which combines sweet vanilla and malty cereal grains with a hint of soft dried fruit (think of sultanas and raisins) and spice (imagine nutmeg). On the palate, this has a sumptuous velvety feeling and is viscous in the mouth. There is a lovely mix of elements - honey, vanilla, toffee, dried fruits (especially sultanas and a touch of candied orange peel), malt, cereal grains and maybe just a whiff of smoke (imagine a sulphury type like coal smoke). The finish is rich, fruity and malty. A well balanced and very good dram that has more complexity than the 15 years old. £45-50 a bottle (pictured above at the beginning of the post).

We tried both of these whiskies in the Inverness branch of The Whisky Shop, the UK's biggest chain of whisky stores. Our thanks to Scott and Neil for the opportunity to sample them.
posted by Matt C at 3:55 PM

I bought my 18 from the distillery a couple of weeks back, now that youv'e given this tasting note I can't wait to try it. But I'm a patient guy and will wait till the time is right, thanks for the notes