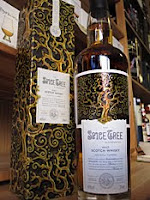 Spice Tree is a new release from Compass Box, a independent bottling company with a difference. A version of Spice Tree was originally released in 2005 but was discontinued shortly afterwards due a legal wrangle with the Scotch Whisky Association (SWA). This first Spice Tree gained good reviews from the trade and consumers but the problem lay in the maturation method. In Scotland, casks must have been previously used and nothing must be added to alter the flavour. Compass Box introduced new oak staves that they placed in to the casks and these created a greater surface area between the wood and the whisky, therefore increasing the flavours artificially. This method is similar to the one commonly used in the wine industry.

In this new version of Spice Tree, Compass Box have got around this 'technicality' by replacing just the ends of the casks with new oak that is heavily toasted and it is these new ends that create a similar flavour profile to the original oak staved Spice Tree. The whisky has been mostly matured in regular ex-bourbon casks before being transferred to the bespoke toasted end casks for the last two years. This new Spice Tree is 100% single malt from the Clynelish distillery in the north east Highlands, is bottled at 46% ABV and forms part of Compass Box's current core range. A bottle can be purchased from specialist whisky retailers and the Compass Box website for between £35-40.

Compass Box was founded in 2000 by John Glaser. The company has offices in West London and Edinburgh and buy whisky from a small number of distilleries and then craft them into their own unique whiskies. The range includes single grain whiskies, vatted malts, blended whiskies and occasional other releases, such as the recently re-released 'Orangerie', a whisky infused with orange. All are released in small batches, often using only two single malts to create a unique product with a catchy name. By doing their own blending and vatting, Compass Box have less restrictions than other traditional independent bottlers and is a former winner of The Whisky Magazine's 'Innovator of the Year'.

The colour of the new Spice Tree is golden amber and the nose is big, sweet and full of oaky vanilla and malted barley cereals. There is also a ginger-like spiciness and some soft woody spice notes that are reminiscent of cinnamon and nutmeg. It tempts you to want to taste it. On the palate, this feels full bodied, thick and creamy in your mouth. The whisky is packed with gorgeous vanilla and sweet malty grains. Beyond these are more delicate elements coming through - some honey, woody spices (think of cinnamon and nutmeg again), ginger, some lemon zest, just a hint of salt and a whiff of background smokiness. The finish is long, sweet and rich with a gorgeous nutty note joining the others (imagine toasted almonds and coconut, maybe?). The vanilla and maltiness fades slowly to give a lovely, sumptuous finish to the whisky.

This is a very good whisky that would be great as an after dinner sipping dram. We tried Spice Tree with some robust mature Cheddar and hard goats cheeses (as recommended in Compass Box's press release) and it went extremely well with both of them. Excellent stuff and very enjoyable.
posted by Matt C at 6:21 PM