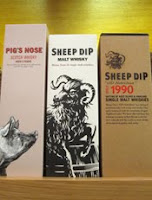 The Pig's Nose and Sheep Dip whiskies are made by a small independent whisky producer called the Spencerfield Spirit Company. The Managing Director and founder is Alex Nicol, who formerly held prominent positions at large beverage companies such as Scottish & Newcastle and Whyte & Mackay, as well as at Glenmorangie and Laphroaig distilleries. The company is based on Spencerfield Farm, close to the Scottish town of Inverkeithing in Fife. It is still a working farm and lies within a rich, fertile belt of land that is well renowned for growing high quality barley. The farm was originally built in 1559.

The range of whiskies have been developed in conjunction with Richard Paterson, the revered master blender for Whyte & Mackay. Each whisky is aimed at a different flavour profile with Pig's Nose being sweet, Sheep Dip being softer and creamier and the Old Hebridean being smoky. We were lucky enough to try the full range side by side at a recent weekend food fair held on the South Bank in London, next to the Royal Festival Hall, Hayward Gallery and River Thames. 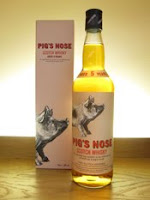 Pig's Nose 5 years old
This is a blended whisky that contains a mix of Lowland, Speyside and Islay single malts and specially selected grain whiskies. The youngest whisky included is five years of age (the age on a blended whisky is that of the youngest whisky). The name is said to come from the fact that when Richard Paterson presented this whisky someone commented that it was "as soft and smooth as a pig's nose"! It is bottled at 40% ABV and a bottle should cost around £20 from specialist whisky retailers.

The colour of Pig's Nose is golden amber and the nose is bold but youthful. There is plenty of caramel and green fruit up front (think of apples and pears, especially peardrops) and these are followed by some distinct cereal grains and dried fruit (imagine sultanas). In the background there is a hint of a slightly acidic aroma that is reminiscent of vinegar. This whisky mirrors the character of the nose when tasted on the palate, although it is a little more viscous and rich than the nose suggested. There is again the combination of caramel, green fruits, cereals and dried fruits (add in a touch of candied orange peel), with the obvious sweetness tempered by a slight spiciness (think of black pepper) and that acidic vinegar note. The finish is of decent length, although the youthfulness of the spirit comes through and it becomes quite sharp and dry right at the end. 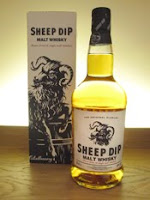 Sheep Dip
This is a vatted whisky. This means that it only contains single malts and these have been married (or mixed) together. Sheep Dip contains 16 different single malt whiskies from the Lowland, Highland, Speyside and Islay whisky regions of Scotland, and they are of different ages (mostly between 8 and 21 years of age). The name is taken from the time when local farmers used to hide their homemade whisky spirit from the Customs & Excise offices, by storing it in casks marked 'sheep dip'. Sheep Dip is bottled at 40% ABV and should cost £25-30.

The colour of Sheep Dip is dark gold and the nose soft and fragrant. There is an immediate hit of vanilla and dried fruit (imagine sultanas and apple), before distinct gristy cereal grains and dried grass (think of hay) come through. Add to this some wood spices (cinnamon and cedar wood especially) and hints of orange marmalade and coal smoke, and you get a very promising combination. On the palate, this feels creamy and velvety and is initially quite sugary and fruity (think of brown sugar, butterscotch, honey and sultanas). These are joined by the vanilla, grains and wood spices from the nose, with the cereals particularly prominent. Then comes a whiff of sulphur-like coal smoke again. The finish is long and full of vanilla and honey sweetness which is balanced by heavier wood spices and smoke, both of which give it a pleasant drier edge. 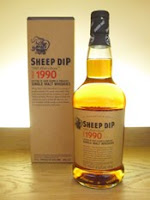 Sheep Dip 1990 'Old Hebridean'
This is the newest edition to the range and is marketed as the older sibling to the regular version of Sheep Dip. The whisky is a vatting of Ardbeg, Dalmore and Fettercairn single malts that have been matured seperately for the first 10 years and then married together and matured for a further 10 years. Therefore, the price of £45-50 offers great value for money. It is bottled at 40% ABV and is available from specialist whisky retailers. The name is taken from a rare breed of Scottish sheep called Old Hebridean, that is depicted on the packaging.

The colour is golden yellow and the nose offers clues to the whiskies included - especially some caramel and zesty candied orange from the Dalmore and pungent smoke from the Ardbeg. There is also honey, vanilla and a hint of spices (think of cinnamon, nutmeg and clove). On the palate, this is bold and expressive but there is a softness and balance that demonstrates the age and sympathetic marrying of the whiskies. It feels rich and indulgent with plenty of honey, vanilla, distinct cereal grains and slightly bitter bonfire-like smoke. These are backed up by wood spices (imagine cinnamon and nutmeg again), candied orange peel, dried fruits (think of raisins and sultanas), toffee, a drop of iodine and a tangy saltiness (imagine brine). The finish is long with the bonfire smoke becoming more peaty. It starts sweetly, with honey and toffee prominent, before becoming pleasantly more bitter and dry with the spices and iodine coming through. Truly delicious!

What's the verdict?
The Spencerfield Spirits Company have produced a good range of whiskies here. There is something for everyone - the sweet Pig's Nose and the richer, softer Sheep Dip, both of which would be excellent with a mixer or in a cocktail. The Old Hebridean offers the smoky option and could be mixed but would be perfect taken neat and rivals and exceeds some single malts. All are good, offer great value for money and would be excellent examples to introduce a beginner to the world of whiskies. What's our favourite? .... that's a tricky one, but we will go for the Sheep Dip.
posted by Matt C at 11:07 AM