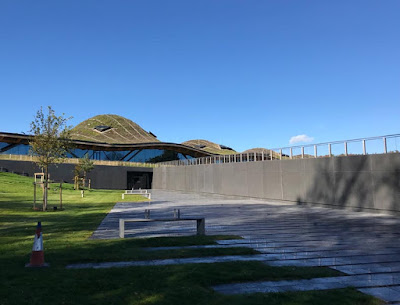 The last five years have been extremely vibrant for the whisky industry. Many new distilleries and whisky-making projects of varying sizes have been proposed and built. Arguably one of the biggest and most controversial is the re-housing of The Macallan, the hugely popular single malt brand, in to a brand new production facility. This opened back in the Summer and Matt paid a visit to take a look on a recent visit to Speyside.


It was almost 10 years ago that we visited The Macallan for the first time. As new converts to the whisky world it was one of the first big distilleries, both in terms of production and brand size, that we had seen. We remember walking away with a slight sense of anti-climax. Whilst set in a stunning location overlooking the River Spey and rolling Speyside countryside, it seemed to lack any personality and warmth. The lasting impression was one of clinical corporateness.

Fast forward nearly a decade and we are back. But this is now a very different place to that we had previously toured and been underwhelmed by. The old distillery and visitor centre now sit silent and away from the spotlight. No whisky has been made there since November 2017. Production has been moved to a new state-of-the-art facility a stone's throw away, the like of which has not been seen in the Scotch whisky industry before.

The Macallan was founded in 1824 by Alexander Reid on the Easter Elchies estate, which runs down to the banks of the River Spey. Named as Elchies Distillery, it became The Macallan in 1892 following a change of ownership. The brand has now grown to such an extent that the old distillery, which in itself was a replacement for the original, could not produce enough spirit to meet demand. Therefore, the radical step was taken to build a new distillery.


And what a building it is. It can be seen from the village of Craigellachie down on the other side of the River Spey, perched on the hill top. But this is no ordinary new distillery and one that has not followed the traditional model or well-trodden path. The contoured grass covered roof is designed to be both eco-friendly and blend in to the landscape.

Up close it is even more impressive. Some critics have described it as a cross between Teletubby Land and Hobbiton from The Lord of the Rings, but this is doing this ground breaking piece of architecture a serious disservice. The new distillery is the culmination of a six year project, two years of planning and four of construction, and was designed by Roger Harvester & Co. at a cost of £140 million.

Some of the statistics are staggering. The distillery is 207 metres long and 67 metres wide. Two thirds of it is below ground after 1.5 million tonnes of earth were excavated - some of this was moved to the roof, but most was moved to create a new hill which hides a large new warehouse complex from view. It is 27 metres tall at its highest point with a wooden framed load bearing roof structure.


Walking up the long path, which seems slightly wheelchair unfriendly if honest, you begin to see the place for yourself. A cavernous space greets you inside that houses the ticket desk, shop, toilets and a small cafe. The space is dominated by a museum area, which is home to a staggering 842 bottles of Macallan and includes modern day releases and a large amount of rare and archive bottlings. Goodness knows how much the collection cost to assemble.


Our tour guide is Michelle. Refreshingly she tells us that we can take photos in all but one area of the distillery interior and her personable style was equally as refreshing and in contrast to our previous visit. Upstairs and through some glass doors, the full impact of the new distillery's structure is revealed. Wooden beams criss cross each other and undulate above you as a vast glass window runs the full length of the building. It is awe inspiring.


As Michelle is talking it was difficult to concentrate if honest due to the visual overload presented by the structure. It is like nothing else that we have seen or anything else in the industry. A brief history of the Elchies Estate and the Macallan is followed by a run through of the whisky making process via the use of a couple of interactive demonstration models.

Then it is on through to the still house. Walking passed the banks of stills we make our way to the huge mash tun. This is the largest mash tun on Speyside and has a capacity of 17 tonnes of grist. They do six mashes per day and operate seven days a week, giving the staggering volume of over 700 tonnes of barley used by the distillery per week. What is even more staggering is the large hole next to the mash tun that enables them to install a second mash tun of the same size in the future ...


The fermentation washbacks are tucked away and out of sight. Michelle explains the fermentation process with the aid of another interactive model and gave specific information relating to Macallan. Fermentation is 60 hours and the resulting wash is around 9% ABV. This wash then goes to be double distilled through the stills.

Again, the still set up is like nothing we have seen before. There are 36 in total and these are split in to three groups of 12 and arranged in a circle. Each circle has four wash stills for the first distillation and these feed eight spirit stills where the second distillation takes place. The short and fat stills are replicated from the old distillery to ensure the exact same character of Macallan's famous robust, oily and heavy spirit. This new distillery will make 15 million litres in its first year.


Michelle led us from the production area in to an interactive walk-in display about maturation, wood and casks. This shows different cask sizes as well as the journey of the wood from tree to barrel, all via a slick video production that is projected on to a wooden wall. The finale is a simulation of the barrel charring process that cleverly uses light and scent to transport you inside a cooperage.

Macallan use both American oak, sourced from Kentucky, Missouri and Ohio in America, and European oak, which is grown in northern Spain. They currently have 330,000 casks maturing on the distillery site and will be building six more massive warehouses over the next six years to deal with the extra production quantities.

The final part of the tour took place in The Macallan Bar. Following a brief 'how to taste whisky' presentation from the bar man, whose name we cannot remember unfortunately, we move on to the whiskies.


Our tasting kicks off with a sample of the new make spirit, which was presented at the cask-filling strength of 63.5% ABV. This was interesting to taste and is something normally missing from most distillery tours. Then followed four whiskies - the core range 12 year olds of Triple Cask, Double Cask and Sherry Oak Cask, plus the limited Whisky Maker's Edition - with a further option to buy some rare drams or a bespoke Macallan cocktail afterwards.


The balance between customer experience and increased production capacity seems to meet the demands of both. Some have argued that the entire distillery is design over substance. Maybe it is design and substance ... let us not forget that they will produce 15 million litres of spirit in the first year, after all.

The interactive demostration models help to bring the whisky making process and maturation to life in an easily understandable manner. This is key as they receive large numbers of visitors, most of who will have little or no knowledge of production. The language of the tour and tasting is strategically pitched at a beginner and non-whisky drinker level. Therefore it gets criticised by whisky fans or those with a higher level of knowledge.

But is it opening the whisky world up to others and inspiring new drinkers to whisky, and Macallan specifically? We think it is and that can only be a good thing - the more whisky drinkers there are then the healthier it makes the entire industry. Go and visit ... it will be like no whisky distillery that you have ever seen.

To read about our 2009 visit to the old distillery - click here.

posted by Whisky For Everyone at 5:02 PM