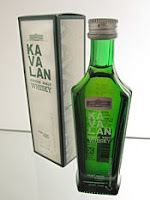 A Taiwanese whisky?
Kavalan is a single malt whisky that is made by the King Car Corporation in Taiwan. King Car was set up in 1979 and is now Taiwan's biggest beverage and food manufacturers. This new distillery is one of the most technically advanced in the world and is located in Yuanshan, a town in the north of Taiwan. Yuanshan lies to the south of the major cities of Taipei and Keelung and close to the Pacific coast. It has copper stills that were constructed in Scotland and the distillery has an annual capacity of approximately six million bottles.

Beating the Scots
The profile of Kavalan Taiwanese whisky has risen dramatically following a recent blind tasting. This was held by famous British newspaper The Times and they put Kavalan single malt up against three Scottish blended whiskies and the new St. George's English whisky. To read the full article from thetimesonline, click here. They cheekily did this on Burns Night (Scotland's unofficial national day and one where whisky forms an important part of the celebrations) and invited esteemed people from the world of whisky to taste each one blind. We suspect that they were trying to get a 'controversial' non-Scottish winner as the outcome and they succeeded as Kavalan gained significantly more marks than the other entrants.

Why Kavalan?
King Car decided to name their whisky range Kavalan after a group of indigenous people who lived in the Yi-Lan County where the distillery is located. The range of whisky is currently small and consists of two single malts (including this Port cask) and the Solist collection, which currently has two single cask releases - one from a bourbon cask and one from a sherry cask. The Kavalan whisky has been created, selected and blended by the legendary Dr. Jim Swan, the Master Distiller at Penderyn distillery in Wales. He is a worldwide authority in the field of alcoholic beverages and has consulted with numerous distilleries, breweries and wineries over many years. We have written about the regular single malt and the bourbon cask Solist - click on the links to read.

More 'angle's share'
This Kavalan Port Cask is bottled at 40% ABV and is matured in ex-bourbon casks before being transferred to Port casks. It is currently only available in Taiwan and major cities in China, with a bottle costing around £50. The whisky is only three years of age, but whisky ages much faster in Taiwan's warm and humid climate. They have to bottle it at this age as they lose around 10% of the whisky's volume each year to the angel's share (the name given to the evaporation of the spirit while maturing in the cask). In comparison, this figure is around 2% a year in Scotland. We would like to thank Ian Chang, the Head Distiller at Kavalan, for giving us this sample and Lisa Huang for introducing us to Kavalan whisky.

Our tasting notes
This Port Cask finish is walnut brown in colour and the nose is rich and appealing. There is a sumptuous mix of aromas - toffee and dried fruits (think of currants and dried apple) are predominant with vanilla, coconut, walnuts, honey and warming spices (imagine cinnamon and cloves). On the palate, this still has some richness but feels fresher, lighter and spicier than the nose suggests. There is again toffee (although this is more like burnt sugar now) and dried fruits (think of currants and dried orange peel) and these are joined by vanilla, nuts (more like walnut oil this time), honey and the warming spices (still cinnamon and cloves but slightly more peppery). The whole feel is a little reminiscent of mulled wine at Christmas. There is also more red fruitiness (imagine grapes or stewed cherries) that comes through with time. The finish is lovely, rich and of medium length. It is pleasantly sweet, fruity and spicy but a little tannic and drier at the end (this can be felt on your gums especially).

What's the verdict?
Kavalan Port Cask finish is an interesting, lovely whisky. The richness and complexity belies its youthful age and it makes for very pleasant and easy drinking whisky. It is the richest, fruitiest of the three Kavalan whiskies that we have tasted to date. All are very different and very good and we cannot wait to taste more or see what new expressions they are planning. If you are ever travelling through south east Asia, then we would recommend that you have to try these whiskies. Let's hope that with their recent publicity that Kavalan gets a wider distribution and enables more people to try it.
posted by Matt C at 7:52 PM

Very interesting very very so..
i wonder where i can sample this one...
it "beat" the scoth, but the entire tasting was a weird one

one question: when is this delicious whisky coming to the USA? i am nursing the bottle i brought home from Asia.....