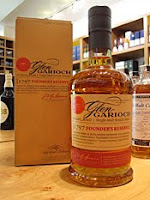 One of Scotland's oldest
Glen Garioch (pronounced glen-geery) was founded in 1797 by Thomas Simpson. This makes it one of Scotland's oldest whisky distilleries that is still in operation. Glenturret is the oldest having been opened in 1775. The original name was Glengarioch (the Garioch is a fertile strip of local farmland that is well known for producing top quality barley) before changing to Glen Garioch in the 1930s. It is located in Oldmeldrum, a small town in the Highlands, which is close to Aberdeen. The distillery is Scotland's most easterly and has an annual production capacity of approximately one million litres.

New expressions
Glen Garioch is currently owned by Morrison Bowmore, which is a subsidiary of the Japanese company Suntory. They took control in 1994 and one year later, they decided to mothball the distillery (mothballing is the process where a distillery is closed but all the equipment remains intact and ready to go again, when required). Until this point, Glen Garioch had produced a lightly peated style of whisky but when it was reopened in 1997, Suntory decided to stop this practice and go for a non peaty style. The range of whisky is small and has just been completely revamped. This Founder's Reserve and a 12 years old form the main part of the range and these are joined by two vintage expressions, 1978 and 1990 (both of which are in the previous lightly peated style). These were released in Europe in Autumn 2009 and will be introduced to the north American and Asian markets shortly.

Our tasting notes
The Founder's Reserve is amber gold in colour and the nose is initially intense and punchy. There is strong malty cereal and some raw spirit, before the nose begins to soften and reveal some lovely aromas - caramel/burnt sugar, vanilla, coconut, dried fruits (especially sultanas), some woody spicy nutmeg and just a hint of citrus (think of orange oil). On the palate, this feels thick and coats the inside of the mouth, starting off sweetly before becoming drier. The sweetness has butterscotch, vanilla and dried fruits (imagine sultanas, raisins and candied peel) notes to it and these are joined by the drier elements - lots of malty cereal grains, a distinct spiciness (think of black pepper and nutmeg) and the tiniest hint of some peaty smoke. The finish has a decent length which has the butterscotch and dried fruit sweetness but also has some peppery spiciness, more maltiness and a tart, sharp spirity nature to it, which is slightly unpleasant (to be fair this become much more palatable and softer when we revisited this whisky the next day).

What's the verdict?
This Founder's Reserve is bottled at 48% ABV, which is a slightly higher alcoholic strength than most 'standard' whiskies in any distilleries range. A bottle should cost £30-35 from specialist retailers, although there are also plans to introduce it to the travel retail/Duty Free sector. Having never tried any whisky from Glen Garioch before, this was certainly interesting to see what the distillery has to offer. The higher than normal ABV led us to add some water but this made it flatten out and lose its vibrancy and intensity. At 48% ABV, it is more rounded and well balanced than expected. This was great to try but may not have the broadest appeal due to the strong maltiness throughout - as a beginner, it would be a good whisky to try once you have sampled some others and want to step up to something different.
posted by Matt C at 12:58 PM