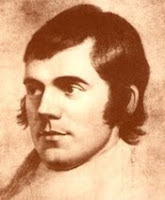 Burns Night is an annual festival that celebrates the life and works of Scottish poet and lyricist Robert Burns (also known as Rabbie to his friends) and has a strong association with whisky. Burns is widely regarded as Scotland's national poet and the festival has become Scotland's unofficial national day. It is celebrated on January 25th, the date of Burns' birth. Burns Night has a rich heritage in Scottish culture and combines two of the nation's favourite pastimes, eating and drinking whisky, with the legendary poetry of Robert Burns.

Robert Burns was born in 1759 in the small town of Alloway, Ayrshire. The town is located two miles (3km) to the south of Ayr in the Lowland region of Scotland. The house where he was born is now the Burns Cottage Museum. Burns was tutored mostly by his father for his early education before starting formal schooling in 1772. His first attempt at poetry was in 1774 - it was entitled O, Once I Lov'd A Bonnie Lass and was inspired by his first love. He went on to write hundreds of poems and songs including famous works such as Tam O'Shanter, My Love Is Like A Red, Red Rose and Auld Lang Syne, which is traditionally sung around the English speaking world on New Year's Eve.

As time passed and Burns' work became more renowned, so did his reputation for liking whisky and women. His heavy drinking and adultery gained him notoriety and scorn within literary circles, although the quality and output of his works remained consistently high. His first illegitimate child was born in 1785 and he went on to father 12 children with four different women (although these totals are believed to both be higher!). He died on July 21 1796, aged just 37, of rheumatic fever that is believed to have been accelerated by a degenerative heart condition from his childhood. His final child was born two days later, on the day that he was buried with full civic and military honours. Burns' grave stands in a graveyard in Dumfries.

So how did Burns Night begin and what does it involve? It is believed that the first Burns Night took place over 200 years ago in 1801. This is less than five years after Burns' death and was celebrated by a group of scholars who were fans of his works. In the early days, it was seen as the perfect platform to celebrate Scotland and being Scottish, incorporating Burns' poetry, Scottish food (most notably haggis, neeps and tatties) and copious amounts of whisky. The popularity and celebrations grew year on year until we have the Burns Night that we know today.

The modern Burns Night supper has evolved over time but remains quintessentially (some would say, stereotypically) Scottish. The core of the supper is the haggis (a mixture of offal, cereal grains, oatmeal, herbs and spices wrapped in the lining of a sheep's stomach) and this is served with neeps and tatties (turnip/swede and potato). This can be proceeded by a soup based starter - the three most common are Scotch Broth (a thick soup that contains barley and anything else that you may have), Cullen Skink (a fish based chowder) or Cock-a-leekie soup (the clue is in the name - it's chicken and leeks, then prunes are added). Dessert can take any form (if you have space or haven't had a heart attack by this point!), with cheese, Cranachan (whipped cream, whisky, raspberries and oatmeal) or Clootie Dumpling (a cake made with dried fruit, condensed milk, spices and golden syrup, then cooked in a cloth or cloot in Gaelic) being the most popular. These are traditionally accompanied by whisky at every opportunity. 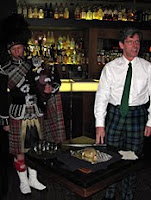 The main ceremonial part involves the reading of Address To A Haggis - a poem written by Robert Burns to celebrate Scotland and its national food. The haggis is bought in and placed on a table and then the reader performs the poem to the haggis and the crowd. This can be accompanied by bagpipes at larger events (as seen in the image, left). The final act of the poem is to slash the stomach membrane of the haggis to reveal its contents and for the reader to down a dram of whisky (occassionally, another dram can be poured over the steaming haggis). Then the rule is to toast the haggis, have a fun evening and drink whisky!

Other Burns Night facts ...
* Approximately 15 million people worldwide annually celebrate Burns Night.
* There are statues of Robert Burns in Central Park, New York and at Poet's Corner in Hyde Park, London.
* It is estimated that 70% of the UK's annual haggis consumption happens on or around Burns Night.
* Burns Night contributes a staggering £150 million to the Scottish economy each year.
* The poetry of Robert Burns have been translated in to almost every known language and have been used in the works of legendary figures such as Jimmy Hendrix and The Beatles.
posted by Matt C at 12:28 PM