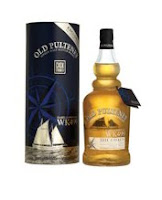 The Old Pulteney distillery is the most northerly mainland distillery in Scotland. Located near to the Highland fishing town of Wick, it lies around 15 mile south of John O'Groats. Old Pulteney is currently owned by Inver House and has a production capacity of three million litres a year. It is also one of the most environmentally friendly distilleries with the excess thermal energy produced there being used to heat over 1000 local homes! The distillery was founded in 1826 and was named after Sir William Johnstone Pulteney, who was the biggest name in herring fishing at the time. This makes it one of the few distilleries to be named after a person.

Old Pulteney's core range consists of a 12, 17, 21 and 30 years old. The brand has grown massively in the last three years and this has seen Old Pulteney climb into the top 20 for world sales of single malts. Worldwide sales grew by 16% alone in 2008. This expression of Old Pulteney was first released last year and is exclusive to the travel retail/Duty Free sector. It is rumoured to include Old Pulteney whiskies of differing ages (between 8 and 12 years) and is bottled at 52% ABV. A one litre bottle should cost around £35.

The name Isabella Fortuna WK499 is taken from a herring trawler that served the port of Wick for over 80 years. The Isabella Fortuna was one of the longest serving boats ever - it was built in 1890 and fished for herring in the North Sea until being retired in 1976. She was registered to the port of Wick, , hence the code WK and 499 was her registration number. An etching of the boat appears on the bottle of this Old Pulteney.

The colour is light golden and the nose feels crisp, fragrant and very promising. There is an immediate hit of vanilla, fresh coconut and green fruit (imagine pears and apples) before a distinct maltiness (think of cereal grains) and a hint of saltiness (imagine salty sea air or brine) comes through. On the palate, the vanilla, coconut and green fruit are evident and it feels slightly heavier than the nose suggested. There is a creamy butter-like quality in the mouth and it is sweeter with a fudge/toffee note particularly prominent. The saltiness is also stronger and very brine-like and is joined by some tangy citrus (think of lemon zest). The combination of all these elements gives a slightly odd zingy, fizzy feeling that is reminiscent of sherbet or bicarbonate of soda and is, frankly, not very pleasant. This is disappointing, as the nose was very promising. However, the finish is more disappointing as it is bitter and dry, with woody and malty (think of the cereal husks especially) notes dominating. Adding water brought out more of the bitter, salty notes and while it softened that 'fizzy' feeling, it flattened out the enjoyable fresh, clean elements of the nose and early palate.

This Isabella Fortuna WK499 is definitely not one for the masses. If you like your whiskies crisp, salty, intense and tangy then it is one you should try, especially for the very decent price. If not, then you may find this hard going. The nose is lovely, the palate starts well but the dram gets progressively less enjoyable from there, which was disappointing given the early promise.
posted by Matt C at 4:48 PM