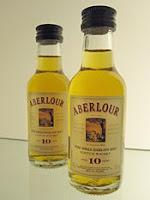 In the heart of Speyside
Aberlour is a whisky distillery that is located in the village of the same name. The village sits on the banks of the River Spey in the heart of the Speyside region. It was founded in 1826 by James Gordon and is currently owned by Chivas Brothers, part of the larger Pernod Ricard beverage group. In 1879, the distillery was completely destroyed by fire and was re-built on a different site by a wealthy local man called James Fleming. Fleming had further massive influences on the town by financing the building of town hall (which still carries his name), a cottage hospital, a school, the installation of electric street lamps and a toll bridge across the River Spey.

France's number one
Aberlour is currently one of the best selling single malts in the world and is known for its use of quality sherry casks during maturation. It sits comfortably within the world’s top ten for volume of sales (7th place in 2008) and is the best selling single malt whisky in France, who consume the most whisky of any country in the world! Aberlour is also popular in the UK and southern Europe. The core range consists of a 10, 12, 16 and 18 years old and these are joined approximately once a year by a cask strength single batch whisky named A’bunadh (pronounced a-boona).

Our tasting notes
Aberlour 10 years old is the distillery's flagship single malt and the one that recently knocked Glenfiddich off the number one spot for sales in France. This is bottled at 40% ABV. The colour is golden amber with a slight reddish hue. The nose is aromatic with a clear influence of sherry cask maturation. There is a lovely combination of caramel, butterscotch, dried fruit (think of raisins, sultanas and candied orange peel) and a touch of woody spice (imagine cinnamon and nutmeg). On the palate, this starts off quite sweet and sugary (that caramel again with some toffee and brown sugar) and has lots of dried fruit (those sultanas and raisins especially). There is also plenty of vanilla and the candied orange peel from the nose is particularly prominent. Other elements present include distinct cereal notes, something nutty (think of hazelnuts) and that woody spice again (especially the cinnamon). It feels rich and creamy and pleasantly coats the inside of the mouth. The finish is long, starting sweetly before turning dry, nutty and refreshingly woody and spicy.

What's the verdict?
A lovely soft, gentle dram that is a very good and affordable example of a sherry cask matured whisky. A bottle should cost around £25, although we got ours from large UK supermarket chain Tesco who had it at the bargain price of £17.85! You should also find it in other large supermarkets and specialist whisky retailers. A cracking, value for money whisky.
posted by Matt C at 2:03 PM

I loved this bottle, both as an inexpensive purchase and for a casual dram off the shelf, but sadly they've discontinued it as a release in the US. This has left the 12 year alone at the cheaper end of their core releases.

Well-put tasting notes. I agree with you whole-heartedly about the caramel and the raisny, woody, spicey goodness. I'm glad someone's still able to enjoy this drop.