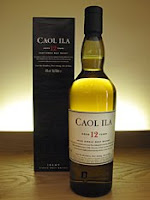 Islay's largest!
Caol Ila is a distillery on Islay, the island famous for its smoky style of whisky. It is the largest distillery on the island with an annual production capacity of 3.5 million litres but despite this, is one of the least known. The reason is that the majority of the stock goes to the Johnnie Walker blended whisky range, which is produced by the current owners, Diageo. The core range of single malts currently includes this 12 years old, an 18 years old, a cask strength version and a limited ‘Distiller’s Edition’ which is matured for its last two years in Moscatel fortified wine casks. Other limited bottlings are occasionally released and Caol Ila is extremely popular with the independent bottling companies.

A rugged location
Caol Ila was founded in 1846 by Hector Henderson, who had formerly owned the Littlemill distillery near Glasgow. It is located on the northeast coast of the island and means ‘Sound of Islay’ in Gaelic. This is the name of the fast flowing, narrow stretch of water that separates Islay from the neighbouring island of Jura and the distillery overlooks this. It has a remote location and is surrounded by cliffs and caves on three sides. This difficult site was selected for its proximity to an abundant water supply from a nearby loch and the good access to local shipping routes.

Our tasting notes
The colour of Caol Ila 12 years old is dark and golden and it has a nose that is lovely and peaty. There is a mixture of sweet, earthy smoke (imagine damp moss and bonfires) and saltiness (this reminds us of sea water/brine). There is also something herbal (think of dried grass or dried seaweed), a distinct meaty quality, that is reminiscent of smoky bacon crisps, and a hint of smoked fish (sounds odd but think of kippers!). The palate is robust but smooth with a lovely blend of flavours. It has a malty sweetness that combines with vanilla, a hint of citrus (imagine lemon zest), some salty seaweed and a slightly more understated peatiness (this feels more tarry than on the nose). This whisky feels heavy, yet clean and almost oily/creamy in the mouth. The finish is long, salty and smoky (now a cross between tar and meat smoke from a barbeque), with a drier feeling than the nose and palate. Some warm woody spices also start to come through right at the end (think of nutmeg or cinnamon).

What's the verdict?
Caol Ila 12 years old is the most popular and readily available of the current single malt range, although you will still have to go to a specialist or Duty Free/travel retail shop to find it. This whisky is a very good, well rounded smoky whisky from a much under rated distillery. It offers good value and a decent alternative to some of the more famous smoky Islay scotch whiskies, such as Ardbeg, Bowmore, Lagavulin or Laphroaig. A bottle should cost around £30-35 a bottle.
posted by Matt C at 12:23 PM

i do love the CI 12. an old favorite of mine, yet i dont hold a bottle in my bar... i need one desperately.

how about the DI? have you tried it? and what about CI 18?

Caol Ila 12yr: Cedar smoke and butterscotch, warm sunlight on the palate, kelp seedlings waiting to become a forest, chewing on pencils, A