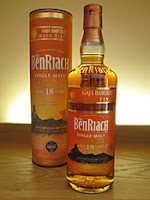 Benriach (pronounced ben-ree-ack) is a distillery in the Speyside region of Scotland and is located approximately 3 miles to the south of the city of Elgin. The distillery was founded in 1897 by John Duff & Co. They had already built the Longmorn distillery on a neighbouring plot of farmland in 1894 (you can seen Longmorn at the end of the road, when standing at Benriach). The original name was the slightly unimaginative Longmorn 2, before changing to Benriach in 1899. The distillery currently has a production capacity of 2.8 million litres per year, with most being released as single malts.

Independently owned
Benriach had a very short early history – it was closed and mothballed in 1903 and not reopened until 1965, when it was bought and restarted . It was closed and mothballed again in 2002. In 2004, an independent group named the Benriach Distillery Company took over the distillery and all of its maturing stock. This group was headed by Billy Walker, a former director of Burn Stewart Distillers. This makes Benriach one of the few remaining distilleries in Scotland that is independently owned. To read about our visit to Benriach last year, click here.

An innovative distillery
Benriach has one of the most innovative ranges of any Scottish distillery - the expansive regular range is matured in ex-bourbon casks, with an additional range of different casks finished whiskies and two smoky ones (they make peaty whisky at Benriach for roughly three weeks every year, which is an unusual practice for a Speyside distillery). They then also release another range that combines the smoky whiskies and the cask finishing! This 18 years old is one of two new limited edition whiskies that have just been released – this one has been matured for 15 years in a bourbon cask and then three years in a Gaja Barolo red wine cask. The other new release has been matured for the same times but using a Moscatel wine cask in place of the Gaja Barolo. Both releases are limited to just 3600 bottles.

Our tasting notes
The colour of this whisky is golden amber and the nose is rich, fragrant and appetising. There are a number of aromas that are present including obvious ones such as rich dried fruits (think of sultanas and raisins), caramel, vanilla and cereal grains. Underneath are more subtle notes - oranges, wood spice (imagine cinnamon and nutmeg) and coconut. The complexity of the nose carries through to the palate, which is warm, silky and spicy (think of white pepper). The elements from the nose are present - dried fruit, caramel, vanilla, cereals, orange (imagine something like marmalade), woody spices and coconut - and the richness and sweetness is complimented by that pepper and some tannic red fruit (think of sweet prunes and raisins). The finish is long, spicy (the pepper and nutmeg are especially prominent) and vibrant. There is a distinct sweet brown sugar note that then becomes quite orange-like before becoming dry, woody and tannic. With the addition of water, the spices are softened across the nose, palate and finish with some honeyed sweetness and a hint of dried grass (think of hay) coming out.

What's the verdict?
This Benriach 18 years old Gaja Barolo finish is available through specialist whisky retailers and should cost £50-55 a bottle (the Moscatel finish is the same price). It is a lovely, complex whisky and is our favourite new release of 2010 to date. The whisky offers an incredible mix of richness, subtlety and spiciness and demonstrates how interesting and good quality a wine cask matured whisky can be. Wine cask maturing is a current hot trend in the whisky trade and it is a shame that not all of them are up to this standard. A top dram.
posted by Matt C at 7:13 AM

I must agree with everything in your article. Having tasted this wonderful dram at the 2010 Whiskyfestival Ghent (Belgium) I am convinced of its qualities. Whisky whine cask are a true joy to drink. Try the Longrow Gaia Barolo finish or the Arran St Emilion finish...true beauties and world class whiskies for an affordable price.