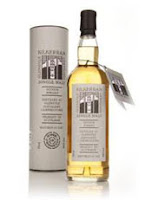 A distillery reborn
Kilkerran is a single malt whisky that is made at the Glengyle distillery. Glengyle is located in the town of Campbeltown, on the west Highland coast of Scotland. The distillery was founded by William Mitchell, who was co-owner with his brother John at the nearby Springbank distillery, in 1872. Glengyle’s history was relatively short and it closed down due to financial problems in 1925. It did not reopen until 2000, when Hedley Smith, the chairman of J&A Mitchell and Co. Ltd - the owners of Springbank, founded the Mitchell's Glengyle Ltd. Their aim was to completely refurbish the derelict buildings, restarting whisky production and attempt to kick-start the Campbeltown whisky industry. The first spirit was distilled in April 2004.

Local historical site
This Kilkerran Work in Progress 2 is only the second official single malt whisky released by Glengyle and is bottled at six years of age with a strength of 46% ABV. The first Work in Progress was released in 2009 and won much praise. The Work in Progress will be a series of whiskies released once a year and will chart the development of Glengyle’s Kilkerran whisky between the ages of five and twelve years. The name of ‘Kilkerran’ is derived from the Gaelic 'Caenn Loch Cille Chiarain' (which translates as 'head of the loch of Saint Kerran'). This was a site that Saint Kerran had travelled to in the Middle Ages and set up a religious group, which is where the town of Campbeltown now stands.

Our tasting notes
The colour of Work in Progress 2 is a light gold with a hint of brown. The nose is fresh and full of vibrant aromas - robust cereal grains come first and remain prominent throughout, with dried grasses (imagine straw), honey and vanilla notes coming through. There is also a zesty lemon tang and a whiff of floral honeysuckle. It is a promising beginning. On the palate, this is creamy and pleasantly coats the inside of the mouth. Again, the robust and distinctive cereal notes kick things off and they have a lovely gristy, oaty character. This gives a bittersweet edge which is complimented by some sweetness (think of honey and vanilla notes) and some fresh fruity notes (imagine the lemon zest again plus some green apples). There is also a pinch of pepper spice and increasing dryness with the dried grassy notes from the nose coming through strongly. This dryness and the peppery nature get carried through to the finish, which is of decent length for a young, fresh whisky. A dash of sugary honey sweetness hits the end of your tongue right at the end.

What's the verdict?
This is a very interesting and expressive whisky that seems a little older than it is. It shows amazing potential and is clearly well made and matured in quality casks. Kilkerran is showing plenty of character and it will be interesting to see how it develops as the Work in Progress series progresses with age. As it stands, 'part two' is delicious, creamy and equally as enjoyable as 'part one'. If you get the chance to try it, either by buying it (a bottle should be £30-35 from specialist whisky retailers) or by sampling it at a whisky show, then do so. We thank Iain Scott of Springbank for the chance to try this lovely dram.
posted by Matt C at 9:36 PM