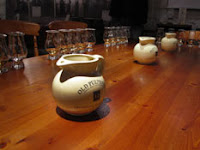 On our recent visit to the Pulteney distillery – the most northerly distillery on the Scottish mainland – we were lucky enough to sample some of the whiskies that are released, plus a couple of other special treats. The core range of Pulteney consists of a 12, 17, 21 and 30 years old. The whisky is sold as Old Pulteney and is known as ‘the maritime malt’, after its heritage, proximity to the sea and the distinct salty characteristics within it. Below are the tasting notes from the tasting, which was hosted by Malcolm Waring – the Pulteney Distillery Manager. To read our review of the distillery visit – click here.

The Old Pulteney brand has grown massively in the last three years and this has seen it climb into the top 20 for world sales of single malts. Worldwide sales grew by 16% alone in 2008 and this helps Old Pulteney head Inver House’s portfolio for sales (their other distilleries are at Balblair, Balmenach, Knockdhu and Speyburn). In addition to the core range, there is an expanding range of whiskies that are exclusive to the travel retail/Duty Free sector. These include the Isabella Fortuna WK499 (click here to read our review) and two 23 year old – one matured in ex-bourbon casks and one in ex-sherry casks.

Pulteney new make spirit
This sample of new make spirit was made earlier in the day and had an alcoholic strength of 68.6% ABV. The spirit is clear and extremely pungent and savoury on the nose with aromatic pear, cereals, leather, yeast, lemon zest and a slightly dirty sulphur note. It is rich and oily on the palate and it coats the inside of the mouth. The strength of the alcohol gives a spicy heat and this is joined by the elements from the nose, especially the green pear. The finish is long, fruity and robust with that dirty sulphur note returning.

Old Pulteney 12 years old
We last reviewed this cornerstone of the Pulteney whisky range way back when we first started writing this blog, so we were interested to try it again. This is bottled at 40% ABV and matured in ex-bourbon casks. The colour is a vibrant gold and the nose has plenty of vanilla, honey, malty cereals and a whiff of salty brine. With time, add in some yeast and over ripe banana. On the palate, this feels oily and soft with plenty of vanilla, coconut, cereals and green apples. More flavours develop, such as some warm baking spices (think of cinnamon and nutmeg) and that banana from the nose (imagine banana cake especially). The finish is long and slightly sharp with a lemon zestiness and briny saltiness prominent.

Old Pulteney 17 years old
This whisky is bottled at 46% ABV and is mostly matured in ex-bourbon casks with 10% matured in ex-Oloroso sherry casks. The colour is golden with a hint of amber and the nose is a delicious mix of vanilla, dried fruits (especially sultana), oak, cereals, a hint of liquorice and a whiff of salt. On the palate, this starts very softly and sweet with some cereal and honey prominent before becoming much more spicy. Vanilla especially comes through as does some nutmeg, liquorice and ginger. The finish is particularly dry with a lovely woody spiciness present (think of cinnamon bark) plus a slightly musty, earthy note which appears from somewhere. A salty tang is present but less pronounced than in the 12 years old.

Old Pulteney 21 years old
This is also bottled at 46% ABV and has the highest percentage of sherry cask maturation of any Pulteney whisky in the core range (around 30% has been matured in ex-fino sherry casks here). The colour is golden amber and the nose is packed with lovely aromas - almonds, vanilla, oatcakes, crisp red apples and caramel (the combination of the last two is reminiscent of toffee apples). On the palate, this is drier than expected and is packed with oak, cinnamon and nutmeg notes. The fruitiness from the nose is present and joined by sultanas. Also present are almonds, vanilla, some burnt sugar and a hint of saltiness that cuts through the richness and increases with time. The finish is again dry and delicious, if not slightly short.

Old Pulteney 30 years old
This has been matured in ex-bourbon casks, is bottled at 44% ABV and is the oldest and most expensive Pulteney single malt whisky ever released. To try it was a real treat. The colour is a dark gold and the nose is very promising. There are notes of vanilla, butterscotch, coconut, cereal biscuits, nuts (probably almonds?), yeast, banana and some soft dried fruits (think of sultanas and mango especially). On the palate, this is equally as complex with many of the notes present. It is soft and rich with a citrus zest note and the signature salty tang cutting through the richness. More of the banana and mango fruitiness come through with time, as does more vanilla. There is also just a pinch of cinnamon-like spice. The finish is shorter than expected and a little dry.

Old Pulteney 1990 peated single cask
This whisky is only available at the distillery and you can bottle it straight from the cask yourself. It will cost you £80 a bottle and it has an alcohol strength of 57.4% ABV. This single cask is ex-bourbon and has previously held an unnamed peaty, smoky Islay whisky. The colour is golden with a brownish tint and the nose exhibits aromas of vanilla, honey and tropical fruits (imagine mango and banana). Surprisingly, there is little or no sign of any smokiness. This is not the case on the palate as the savoury bonfire-like smoke explodes on your tongue. The whisky is creamy with the vanilla, honey and fruit prominent again. It then becomes very sweet and sugary on the finish with a distinct saltiness making it mouthwatering and refreshing. Very interesting stuff.

What's the verdict?
The opportunity to taste a vertical range from a single distillery is a rare one, especially in the very place where it was produced and matured. This was a great experience and we thank Malcolm for his hospitality. The range is very solid - it contains some very good and under rated whiskies. The best selling 12 years old at its core and this would be a good whisky for a beginner who wanted to explore something a little different and at a decent price (approx. £25-30). The saltiness may put some off but they should be tried. Karen's favourite was the 21 years old and Matt's was the 17 years old, both of which are complex and very enjoyable whiskies.
posted by Matt C at 9:05 PM