Balblair is located in the northern Highlands of Scotland in the picturesque village of Edderton, near to the town of Tain. It lies close to the shores of the Dornoch Firth, one of Scotland’s largest estuaries, with the Highlands rising behind it and the North Highland Inverness-Thurso railway track running next to it. The distillery is one of Scotland's oldest, having been founded by John Ross in 1790 - only Glenturret, Bowmore and Strathisla have been operating longer – although the current buildings were all built in 1893. Balblair is currently owned by Inver House Distillers, which is a subsidiary of the larger Thai Beverages group, and they have owned it since 1996.

Our tour of the Balblair distillery starts with the short drive from Tain to Edderton, a gorgeous little village that could adorn many a tin of shortbread, especially given the amazing display of vibrant autumn colours. The drive takes us passed the gates to Glenmorangie – Balblair’s larger and more illustrious immediate neighbour – before we turn off down a narrow lane to Balblair. The distillery is not currently open to the public, so the chance to look around felt like a privileged one. 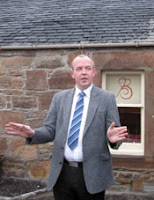 We begin in the large open courtyard outside the Balblair offices, where we are greeted by John MacDonald (pictured, left). He has been the Distillery Manager at Balblair since 2006 and this follows 17 years service down the road at Glenmorangie, where he worked his way up through the ranks to the position of Assistant Manager. He puts his current success at Balblair, where his whiskies are winning many awards, down to the fact that he has done every job within a distillery – warehouseman, mill-man, mash-man, still-man and then senior management. 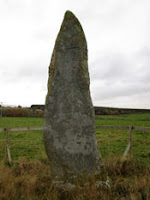 John tells us a number of interesting geological and historical facts relating to the distillery and its local vicinity. Balblair means ‘battlefield’ in the ancient Pictish language and the area around Tain and Edderton was a Pict stronghold over 2,000 years ago. Clach Biorach, the local standing stone (pictured, left), was believed to be the centre of their community and stands close to the distillery. The stone has inspired the new packaging of Balblair’s whiskies, where they have used depictions of Pictish symbols and carvings on the bottle and box. 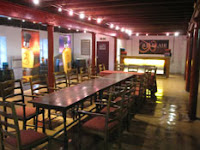 We also learn that the water source for Balblair is the Allt Dearg spring, which is located high up in the hills about 4 and a half miles away from the distillery – this is one of the longest distances between any water source and a distillery in Scotland. The water runs using gravity via an open ditch from the source to the distillery and is used for all Balblair’s production and cooling needs. As it begins to rain, we move inside to the former floor malting room. This room (pictured, left) is earmarked to be the new visitor centre, which will open at Balblair next year. It has a distinctly ‘unfinished’ feel at the moment but the space is amazing and will make a memorable place for visitors to start their distillery tours in the future.

The mill room and adjoining malt storage area are next. The malted barley used for Balblair’s whiskies has a very low level of peat (approximately 1.5ppm – phenols per million) and they use several strains of barley. The mill is made by the now defunct Porteus company in 1981 (Porteus were a victim of their own success, making milling equipment that rarely broke or needed replacing - therefore no distilleries ever needed new ones!) The malt is stored in 10 huge silos, which hold 3 tonnes each. Therefore a total of 30 tonnes can be held and this fuels the distillery for 3 and a half weeks. This means that Balblair can maintain full operation during periods of bad winter weather when lorries cannot reach the distillery to deliver grain. At Balblair one tonne of barley produces 405 litres of spirit and it is on course to reach 1.36 million litres this year. 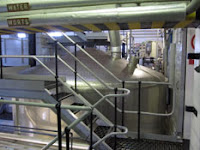 We move on to the mashing room, which one of our tour party described as having a ‘Bond baddie evil hideout’ feel. This equates to lots of stainless steel equipment, piping across the ceiling and electrical panels with illuminated buttons! There is a stainless steel mash tun (pictured, above), where water is mixed with the milled barley (called grist) to extract the soluble sugars needed later in the whisky making process. This process is done at three different temperatures – 65°C, then 82°C and then 92°C. Balblair’s mashing time is one of the slowest in the industry at over six hours, as they use a rare natural drainage system. John explains that as a result the drained sugary liquid (known as wort) has a very low concentration of fatty compounds and this gives Balblair spirit its flavoursome and fruity characters. 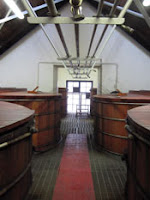 Beyond the mash room is the room where the fermentation takes place. Balblair has six massive traditional wooden washbacks (pictured, left), with each one containing fermenting liquid at different timings in the process. Each washback can hold 21,500 litres of the sugary wort, to which 100 litres of liquid distiller's yeast is added. This then ferments for up to 62 hours, which is one of the longest times in the industry. This is so that the micro-flora bacteria held within wood of the washbacks have the maximum opportunity to add their character to the fermenting wash. Once finished, the wash has an alcoholic strength of 7.5% ABV and is like a strong ale - John let us taste the wash and it was very very fruity, reminiscent of a wheat beer. 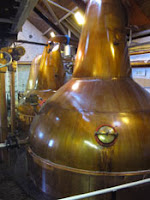 Next, John leads us in to the still room. You quickly get an idea of how cramped it is going to be by hastily ducking under a slightly low copper pipe as you enter! They have one pair of stills at Balblair - one wash still and one spirit still (pictured, left). Unusually, there is also a third still at the far end. It is unorthodox to see an odd number of stills, as they tend to work in pairs. The story behind this third still is that it has not operated since 1969, when it was replaced, and it is too difficult to remove from the building! The stills have very large bulbous bases and short fat necks, which helps to create a heavier, more robust and oily style of spirit. Both lyne arms run outside through the still room wall, where the alcohol vapours are passed through condensers to become liquid again. 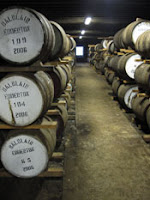 With the weather closing in again, we are taken to shelter from the rain in one of Balblair's eight dunnage warehouses. The word 'dunnage' means to 'provide ventilation' but in this case refers to the traditional style of warehouse building that have stone walls, earth floors and a tiled roof (as pictured, left). These buildings provide the perfect environment, temperature and 'ventilation' for the maturing whisky. To further aid the maturation, the whisky casks are only stacked three high. Balblair's eight warehouses have a capacity of 26,000 casks of which around 15% are earmarked for single malt release. The rest is maturing for inclusion in a wide range of blends such as the popular Chivas Regal and Inver House's own Hankey Bannister range. John informs us that approximately 97% of the whisky is maturing in ex-bourbon casks, with the further 3% in ex-sherry casks.

Our tour concluded with a tasting hosted by John and then a large lunch. The reviews and tasting notes for this lovely range of whiskies can be found in a separate post - click here to view. We would like to take this opportunity to thank John for his insight in to the industry and his distillery, his information and his hospitality. If you are in that part of Scotland next year, then be sure to pay a visit and join one of their new tours. What you will find is a picturesque and traditional whisky distillery, that is hard to beat on both fronts.
posted by Matt C at 11:31 PM