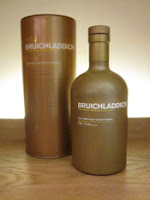 Bruichladdich (pronounced brook-laddie) is located on the western peninsula of the famous whisky island of Islay and sits on the shores of Loch Indaal. Islay is the traditional home of the world's smoky whiskies but the Bruichladdich distillery style is in contrast to these, being lighter, fresher with generally little or no peatiness. The distillery was originally founded in 1881 and was built using stones from the local beach (plus concrete, making Bruichladdich one of the first buildings in the UK to be built using it!). It is a small distillery with an annual production capacity of just 700,000 litres. Bruichladdich translates as 'the brae (or hillside) by the shore' from Gaelic.

Bruichladdich is one of Scotland's most innovative distilleries and one of very few that remain independently owned. It was taken over by a group of four entrepreneurs who formed the Bruichladdich Distillery Company in 2000 and their aim was to give Bruichladdich's whisky production and release programme an experimental edge. In contrast to this, the new owners renovated the distillery to its former glory and decided to maintain the traditional whisky making machinery and techniques. There are no computers used for production and it is one of the most traditional and historical distilleries in Scotland.

The Golder Still is a release that was distilled in 1984. It was bottled in early 2008 at 23 years of age and there were just 4866 bottles upon its release later in the year. It was bottled at an alcoholic strength of 51% ABV. The Golder Still forms part of a mini series that was released by Bruichladdich at that time, and followed two other limited editions - the Redder Still and the Blacker Still. You can still find bottles around, although at £125 it is a little more expensive than when it was released.

The 'Golder' name is believed to be derived from the intense gold coloration of the whisky, that is a direct result of it maturing ex-bourbon casks that were experimentally constructed to be shorter and fatter than a normal old bourbon cask. This means that the whisky to wood ratio is greatly increased - therefore, the natural compounds in the wood have more relative influence on the whisky. The packaging is also impressive and distinctive, especially the bottle which boasts a matt gold coating.

Our tasting notes
The colour of Golder Still is golden yellow and the nose is expressive and fresh for a whisky of this age. Initially, there is a ton of vanilla and these are quickly joined by a lovely combination of aromas, including honey, cereal grains (imagine oatcakes), almonds and some distinct woody spices (think of cinnamon bark and nutmeg). Two further subtle notes give pleasing depth to the nose - the first is reminiscent of custard powder and the second has a slightly dusty, earthy quality. On the palate, this whisky does not disappoint as the promise of the nose is fulfilled. It is initially surprisingly tangy, with a citrus zesty note particularly prominent (imagine orange especially) then giving way to some lovely, sweet and rich characteristics - think of vanilla, honey, malty cereal grains and increasing wood spice (that cinnamon and nutmeg again). The whisky feels syrupy and oily in the mouth with the spicy notes particularly gripping to the palate. The finish is lovely but quite short. It begins sweetly with vanilla and honey notes, before turning drier and spicier with some bitter oakyness coming through to give a fresh, mouthwatering quality. A final hit of zesty, almost spiced, orange accentuates this.

What's the verdict?
A delicious dram that is of high quality. It shows what can be achieved by using good ex-bourbon casks sympathetically. The Golder Still is lovely, with a complex mix of rich, pleasant and complimentary characteristics. The person that shared this with us said (before we knew what it was ...), "if you don't like this whisky, then there is something wrong with you!". We would not quite go that far but if you ever get the chance to try or buy it, then we will let you make your own mind up!
posted by Matt C at 9:08 PM

Really enjoyed your comments. Happen to be nosing a dram right now of the very same malt. It is still availble in Canada.

yes, here on Vancouver island I found some!