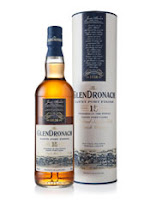 The innovative independent distillery at Glendronach have launched a new addition to their Wood Finishes range – this 15 years old Tawny Port finish. The Glendronach distillery (pronounced glen-dron-ack) is located close to the town of Huntly, in the east Highlands of Scotland. The distillery was founded in 1826 by James Allardes and later went on to become an important part of the William Teacher & Sons empire. By the 1960s, most of the whisky produced at Glendronach was being used within the popular Teacher's blended range of whiskies. The distillery is relatively small with an annual capacity of 1.4 million litres and one claim to fame was that Glendronach was the last distillery to use coal fires to heat its stills - these were converted to steam heating in 2005.

In 2008, Glendronach was given a new lease of life, following a period of closure by previous owners Pernod Ricard. The distillery was taken over an independent company called The Benriach Distillery Company Ltd, who are the innovative owners of another Speyside distillery at Benriach. They immediately made a decision to expand the range of Glendronach whisky, which now contains 12, 15 and 18 year olds. These are complimented by numerous single cask releases from their premium older stock, plus the Wood Finishes range. Within the three years since the takeover, awareness of Glendronach as a single malt whisky has grown massively and sales have reflected this by growing tenfold.

This whisky is the latest addition to the Wood Finishes series and has spent a majority of its 15 years maturing in European oak ex-sherry casks, before being transferred for a short period to Port casks. This expression has been bottled at 46% ABV and is available from specialist whisky retailers in the UK for £45-50 a bottle. It will also be sold in another 20 export markets. The whisky is non-chill filtered, natural in colour and there are only 6,000 bottles in the release.

Our tasting notes
The colour of this Glendronach is golden amber but with a distinct (and slightly unusual) reddish, pink tint. This makes it look almost peach-like and similar in colour to a light rosé wine. The nose is full of bold aromas - dried fruits (think of raisins and dates), burnt caramel and stewed red fruits (imagine plums and blackberries). These are backed up by robust bitter cereal grains, plus hints of high cocoa chocolate and baking spices (especially cinnamon and nutmeg). On the palate, this grips your taste buds - it begins quite sweetly with some lovely sugary caramel and a drop of honey, before some tangy orange peel and the stewed red fruits from the nose temper this slightly. With time, the peel and stewed fruits are joined by the dried fruits (the raisins and dates again, plus figs now) and everything is complimented well by increasing cinnamon and cereal notes. The whisky continues to grip your mouth with vigour and the tannins from the Port cask really begin to come through at the end of the palate. These are carried through to the finish, which is particularly dry as a result. The stewed fruit and orange peel are also in evidence, which add pleasant balance.

What's the verdict?
This is a good whisky and one that offers a decent value for a Port cask matured single malt, which are still relatively rare and expensive. As a result, it would be a good example to introduce someone to the concept with, as it shows some lovely red fruit and wood spice notes associated with Port cask whiskies. It is not as sweet as some Port cask finishes that we have tried to date and the dry, tannic nature of the end of the palate and the finish may not be to everyone's taste. However, it should be tried and is another solid release from this innovative distillery.
posted by Matt C at 4:16 PM