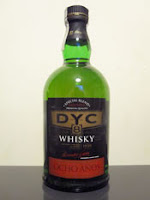 DYC whisky is produced in Spain and this Ocho Años (eight years old) bottling forms part of a core range, which also includes the best selling Regular blend and the Pure Malt - the only Spanish single malt whisky. Many people do not even realise that Spain has a whisky industry (including us before we discovered DYC on a trip there a few years ago) but it makes sense when you learn that Spain is the fourth largest consumer of whisky in the world, behind only France, the USA and the UK. The Ocho Años is a blended whisky, in which the youngest whisky included is eight years of age.  It is bottled at 40% ABV and is available in larger supermarkets and liquor stores in Spain for the very reasonable price of €15.

DYC is the abbreviated company name of Destilerias y Crianza del whisky, which opened Spain's first whisky distillery in 1959. The distillery is located in the town of Palazuelos de Eresma in the Castilla y Leon region to the north west of Madrid. It is a massive distillery complex that has the capacity to produce 20 million litres of spirit per year (this is almost double the capacity of Scotland's biggest whisky distillery at Glenfiddich). DYC is owned by the multi national drinks company Beam Global and they make other alcoholic spirits under license at the distillery. The whisky is marketed to be low budget and is very popular in Spain, being much cheaper than imported Scottish, Irish or American whiskies. It is designed to be mixed with non alcoholic beverages or ice and to be easy drinking in the hot weather.

Our tasting notes
The colour of this Ocho Años is a light golden yellow and the nose is also light, with some gentle understated aromas combining nicely.  These fall in to two categories - sweet (vanilla, honey and butterscotch) and non-sweet (cereals, dried grasses and some lemon zest).  It gives the impression of being refreshing to drink.  On the palate the whisky exhibits basic characteristics, with contrasting elements working nicely together.  This time there is a mix of soft, creamy notes such as toffee, honey and vanilla, plus tangy and drier notes like robust cereal grains, dried grass, fresh lemon juice and some spicy oak.  The combination is interesting and gives that refreshing nature that the nose suggested.  There is no massive complexity here but that is no bad thing, as all the notes are well balanced.  The finish is a little more robust and is particularly grainy, with plenty of bittersweet cereals gripping your tastebuds along with a decent amount of drying oak and tangy lemon zest.

What's the verdict?
This DYC is a simple but very pleasant and easy drinking whisky.  It has basic characteristics in abundance but lacks a little depth and complexity.  However, this makes it refreshing and ideal for drinking in a hot climate, which is what it is designed for.  It also offers good value for money and this is why we snaffled a bottle for our collection on our travels to Spain.  Next time that you are in Spain and you see some DYC behind a bar, why not order a dram and try it for yourself?
posted by Matt C at 4:03 PM