Inbox is our weekly round up of whisky news and PR type material that has found its way in to our email inbox. Sadly, we cannot write full articles or do justice to every piece that we receive, so Inbox was born! It features items from around the world of whisky and is published by us each Friday. Within Inbox we will write a few lines detailing each press release/piece of news/PR event that we have received and provide links, where possible, for you to find out further information if you want to. Here's the news that caught our attention this week ...
______________________________________________________________
Amrut > New bottling announced

The award-winning and increasingly popular Amrut distillery, located in the Indian city of Bangalore, have announced the release of their latest whisky.  In an unusual move they have distilled the spirit in Bangalore and then shipped it across to Germany for maturation.  Here, it matured slower than in Bangalore (which is at an altitude of 3,000 feet/915 metres and has high humidity).  the whisky has been matured on the remote unspoilt northern island of Helgoland, whose air benefits from no pollution and sitting on the Gulf Stream.  The maturation and bottling have been done in conjunction with Prineus, Amrut's German importer. Details of the strength, estimated price or amount of bottles were not supplied. For further info about Amrut, visit www.amrutwhisky.co.uk.

Auchentoshan > Switch initiative announced
The Lowland distillery of Auchentoshan have announced a new initiative - The Auchentoshan Switch.  The Switch is a competition for mixologists on both sides of the Atlantic and involves the winners getting the opportunity to work in two top bars - one lucky winner from the UK will work in Apotheke in New York and another winner from the US will work at 69 Colebrooke Row in London.  The competition is centred around Auchentoshan's Three Wood expression and to enter you have to create a short video of you creating two drinks - the first is a lemonade from scratch using raw ingredients and the second is an Old Fashioned using the Three Wood.  The period of entry is between 1 July and 31 August. Go to www,switch.auchentoshan.com to enter and for more details about the competition, the two bars and Auchentoshan.  Below is a short video that they have released to get you inspired! 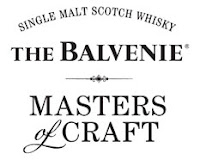 Last month, we reported on the inaugural Masters of Craft competition which was hosted by Balvenie, the famous Speyside distillery owned by William Grant & Sons. The initiative celebrates the often-forgotten crafts and trades that many people pursue. Such craftsmanship is deep rooted in everything that Balvenie does and they believe that this aids the quality of their whiskies. The awards were given across a range of skills and materials - the judging panel was made up of Balvenie’s legendary Malt Master Dave Stewart, TV presenter and designer Kevin McCloud, photographer Nick Hand, Robin Wood, the chairman of the Heritage Crafts Association and Anne Cuthbertson, the editor of the Sunday Telegraph Life magazine. Now they have released a short video of the awards night at the swanky Connaught Hotel in central London, to which we were delighted to have been invited.

Bowmore > Charity whisky tasting
The famous Islay distillery has teamed up with Rob Allanson, editor of Whisky Magazine, to host a special whisky tasting in Glasgow on Friday 15th July in aid of the Bowmore Ben Nevis Challenge - an event of 20 August where Bowmore support the charity Capability Scotland, which sees disabled and non-disabled people working together to take on climbing the UK's highest mountain. The tasting will include some unique limited edition whiskies from Auchentoshan and Bowmore, plus a few other special drams. It will be followed by a raffle and silent auction featuring some rare whiskies signed by Bowmore distillery manager Eddie MacAffer. The Bowmore Ben Nevis Charity Whisky Tasting will take place at the Thistle Hotel in Cambridge Street, Glasgow and tickets are £30 per head. Click here to buy tickets and visit www.bowmore.com/ben-nevis for info on the Bowmore Ben Nevis Challenge.

Macallan > Visitor Centre given 5 star award
The visitor centre at the famous Speyside distillery has been awarded the prestigious five star rating from VisitScotland’s quality assurance scheme. Following the completion of an investment programme of over £1m, The Macallan Visitor Centre offers a highly innovative and distinctive distillery experience. A memorable and interactive learning journey takes visitors through the production life-cycle of The Macallan.  There are two types of tour - The Experience Tour (£10) is lead by The Macallan's knowledgeable guides, ending with a dram of The Macallan. The Precious Tour (£20) is more in-depth ending with a tutored nosing and tasting of some of The Macallan’s older whiskies. The annual review by VisitScotland consists of unannounced visits by an auditor who assesses core areas covering all aspects which have an impact on a customer's visit.
posted by Matt C at 5:27 PM