Inbox is our weekly round up of whisky news and PR type material that has recently found its way in to our email inbox. Inbox was born as we sadly cannot write full articles or do justice to every piece that we receive. It features items from around the world of whisky and is published by us each Friday. Within Inbox we will write a few lines detailing each press release/piece of news/PR event that we have received and provide links, where possible, for you to find out further information if you want to. This week's edition features a couple of items that slipped through the net during our recent two week holiday. Apologies, but better late than never ...
______________________________________________________________
Annandale > A new Lowland distillery 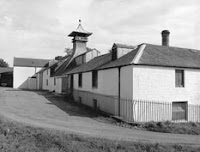 OK - this is a bit of old news but we have only just discovered it! There is a distillery awakening from a very long sleep in the Lowland area of Scotland. It is called Annandale and is located in the town of Annan in Dumfries & Galloway, which is very close to the English border. Annandale was originally opened in 1830, but fell silent in 1919 and has remained unused ever since. That is until 2007, when the derelict site was purchased by David Thomson and Teresa Church. Now following extensive renovation, news has it that the distillery is almost ready to start producing single malt whisky again. We will bring you further news in the future, but in the mean time you can check out their website www.annandaledistillery.co.uk.

Canadian Club > Hire Aussie cricket legend!
The Canadian whisky brand has launched a new pre-mixed drink on to the Australian market - Canadian Club & Dry.  The 'face' of the advert campaign is former Australian cricketer and well-known drinker David Boon - the man famous for downing 52 cans of beer on an Ashes flight from Sydney to London!  Apparently, Boon's tastes have changed and he now prefers a Canadian Club & Dry to a beer.  Only time will tell if other Aussies follow his lead ... but in the meantime, check out the short advert below.

Diageo have submitted expansion plans to Moray Council for a significant expansion to their Speyside distillery at Dailuaine.  The distillery, which contributes large amounts of its single malt whisky to the company's popular Johnnie Walker blended range, will undergo a £9.5 million redevelopment to increase its current 3 million litre annual capacity.  The application is still at the consultation phase, which includes canvassing the opinions of local residents. The company's malt distilling director, Brian Higgs, Diageo's Distilling Director says, "Speyside is already at the heart of our malt distilling operations and I am delighted that, beginning with the Dailuaine proposal, we are looking at further enhancing our business in this area."

Glenfiddich > New Vintage released
The famous Speyside distillery, owned by William Grant & Sons, have announced the release of their latest annual Vintage Reserve.  This bottling was distilled in 1974 and the exceptional cask was selected by a panel consisting of Brian Kinsman (Glenfiddich's Malt Master), Ian Millar (Glenfiddich's Global Brand Ambassador) and the 13 Glenfiddich Brand Ambassadors from around the globe. Brian Kinsman comments, “This year’s Vintage Reserve selection is distinctively Glenfiddich, with rich, spicy oak notes and an amazing vibrancy for whisky of this age. The nose of the 1974 Glenfiddich Vintage Reserve is rich and oaky with vibrant vanilla sweetness and an intriguing hint of polished leather and liquorice. To taste, it’s initially very sweet with a vanilla toffee character – it’s a beautiful whisky.” Just 1,000 bottles will go on sale in September of this year.
posted by Matt C at 6:36 AM