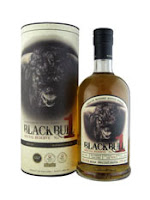 The Black Bull Special Reserve is a newly released blended whisky from Duncan Taylor Scotch Whisky Ltd, the renowned independent bottling company. It joins the award winning 12, 30 and 40 year old versions in the Black Bull range, which has been around since the 1930s. The brand was acquired by Duncan Taylor in 2001 and revamped recently.  The Special Reserve is a small batch release (batch number one in fact) and there are only 978 bottles.  It is constructed using equal measures of single malt and grain whiskies, which is relatively rare in blending circles (the grain whisky percentage is normally higher). This premium blended whisky is bottled at the natural strength of 46.6% ABV and should cost around £95 from specialist whisky retailers.

The Duncan Taylor Scotch Whisky Ltd. was set up in Glasgow in 1938 with the plan to bottle and blend whisky for export to America following the Prohibition period there. They are now based in the town of Huntly, close to the Speyside whisky region of Scotland. Duncan Taylor are reported to have one of the largest privately held collections of rare whisky casks in the world and bottle approximately 200 different whiskies a year. Their range is extensive and has numerous branches to it, which are detailed below. For more information on Duncan Taylor, their whisky and the different ranges, check out their website www.duncantaylor.com.

Our tasting notes
The colour is a bright golden yellow and the nose is rich with oak.  There are plenty of these oaky aromas on show - vanilla, coconut and wood spices (think of sandalwood, cedarwood and cinnamon) - all backed up with some burnt sugar and slightly bittersweet cereal grains.  The nose really opens up with time and even after just a couple of minutes there are some sweeter aromas joining in - honey, green apple, candied orange peel and summer flowers, especially reminiscent of honeysuckle.  The orange becomes more like spiced/mulled orange with further time.  On the palate, this initially feels rich and creamy with plenty of initial vanilla again.  Then the intensity kicks in, as does a pleasant austerity. There are big notes of bittersweet cereals, heavily spiced orange and burnt sugar, which are complimented by lots of oaky wood spices that grip your tastebuds and don't let go.  It feels oily in texture and the sweeter notes are there but have to battle through (think of honey and caramel particularly).  Finally come some notes of raisin and hints of dried grass and distant peat smoke.  The finish is dry and mouthwatering, again exhibiting plenty of the oak, cereals and spice. This is balanced with some essential honey, dried fruit and vanilla.

What's the verdict?
The Black Bull Special Reserve is an interesting whisky that has plenty of complexity and robust character.  The heavy, over riding notes on both the palate and finish are in danger of taking over and making this a difficult dram to get along with, but the underlying sweeter elements pull it back.  The flavours may be too exaggerated for some but this premium blend grows on you, so is worth persisting with if you initially think it may be too much.  Also, adding water dampens down some of these notes and makes it softer.  However, we enjoyed the intensity and found the dryness on the finish left us wanted another sip!
posted by Matt C at 4:50 PM