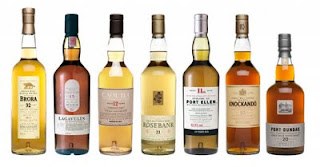 Each Autumn sees the highly anticipated release of a selection of single malt whiskies from the portfolio of drinks giant Diageo, which owns 28 whisky distilleries in Scotland.  For the Special Releases programme they have traditionally mixed limited edition expressions from some of their flagship distilleries with very rare and older whiskies from some of the lesser known parts of their estate.  Some of these include whiskies from closed distilleries whose stocks have dwindled to almost critical levels.  This year's selection of eight whiskies are mostly bottled at the natural cask strength and are non chill filtered.

We are attending the launch of these products in London in October, so our personal tasting notes will follow that. However, below is a round-up and details of each of the whiskies for the Special Releases 2011 to tide you over until then.

Brora 32 years old
Single malts from this coastal north Highland distillery, which closed in 1983, are now very rare.  This bottling consists of just 1,500 bottles and rumour has it that this may be one of the last ever releases that Diageo can bottle.  It is their oldest ever bottling of Brora and this had been matured in a combination of re-fill ex-bourbon and ex-sherry casks.  The alcohol strength is 54.7% ABV and it will have a recommended retail price (RRP) of £300.

Caol Ila 12 years old Unpeated
This Islay distillery is well known and regarded for it soft peaty single malts, but once a year they produce a small batch of unpeated whisky.  Most of this is used within Diageo's range of popular blends but some of the best casks are kept for release.  This is the sixth such release and has been matured in first-fill ex-bourbon casks, which has yielded just under 6,000 bottles.  It has been bottled at an eye-watering 64% ABV and will have an RRP of £55.

Glenury Royal 40 years old
Whisky from this east Highland distillery are extremely rare and highly sought after.  Glenury Royal closed in 1983 and has since been demolished.  Recent releases have been scarce and this is one of the oldest ever expressions that Diageo have bottled from the remaining stocks.  There are just 1,404 bottles, each of which is individually numbered, and it has been maturing in the same re-fill ex-bourbon casks since 1970.  It has an RRP of £525.

Knockando 25 years old
The 12 years old bottling from the small Speyside distillery of Knockando is one of Diageo's best sellers, but older expressions such as this one are much harder to come by.  This has been maturing in first fill ex-sherry casks since 1985 and has been bottled at 43% ABV.  There are fewer than 4,500 bottles in this limited release and each one carries an RRP of £135.

Lagavulin 12 years old
This Islay distillery is one of Diageo's flagship single malts and the popular 16 years old forms part of their iconic Classic Malts series.  It is well loved for its peaty, smoky style of whisky and this one will be no different.  This expression is bottled at the natural cask strength of 57.5% ABV and has become a regular feature in recent Special Releases programmes.  It has been matured in re-fill ex-bourbon casks and will have an RRP of £63.

Port Dundas 20 years old
Port Dundas is a grain distillery in Glasgow which closed a couple of years ago.  Whiskies from this distillery are very rare, as most are used to produce Diageo's range of blends.  This is a 100% single grain whisky and is the first ever such release to appear in the Special Releases.  It has been bottled at 57.4% ABV and there are 1,920 bottles, each of which are individually numbered.  The bottling has been made from just three casks - one new American oak, one new European oak and one re-fill ex-bourbin cask - and has an RRP of £135.

Port Ellen 32 years old
This is the 11th release in the series from this fabled Islay distillery, which closed in 1983.  Port Ellen is highly sought after by whisky collectors and connoisseurs alike.  Stocks are said to be running very low and this release contains just 2,988 individually numbered bottles.  This is Diageo's oldest release of Port Ellen to date and has been maturing in re-fill ex-bourbon casks since 1978.  It has been bottled at 53.9% ABV and has an RRP of £300.  Previous releases in this series have seriously increased in value, some by over 150%, so this is one to watch.

Rosebank 21 years old
This whisky is from another closed distillery, this time from the Lowlands of Scotland between Edinburgh and Glasgow.  Rosebank was founded in 1798 and would be one of Scotland's oldest distilleries if it were still in operation.  However, it closed in 1993 and despite almost constant rumours of it re-opening, it never has.  This expression has been matured in a combination of re-fill ex-bourbon and ex-sherry casks, and there are 5,886.  Remaining stocks are low, so the RRP of £160 seems like a bit of bargain.