This Irish Single Pot Still range was released in May by Irish Distillers Ltd, which is part of the giant Pernod Ricard group.  The range contains four versions of whiskey from their popular portfolio - Green Spot, Midleton Barry Crockett Legacy, Powers John's Lane and Redbreast 12 years old. The idea was to highlight the traditional Irish production method of single pot still distillation - this involves using both malted and un-malted barley in the mashing, then fermenting, before triple distilling in a copper pot still.  This style of whiskey was revered in the 18th and 19th centuries and aided the rise in popularity of Irish whiskey around the globe. Now, most pot still whiskies are used in many of the Irish blends to add depth and character to the flavour, but this range rightly celebrates this genre of whiskey in its own right.

The range is produced at Irish Distillers Ltd's Midleton distillery in County Cork, southern Ireland.  The four whiskies are produced in the same way but using different percentages of malted and un-malted barley, plus different casking for the maturation, to produce the distinctive character of each brand. The Old Midleton distillery started production in 1825. but Midleton as we know it today was founded in 1975 following the joining of the Cork Distillers Company, John Jameson & Son and John Power & Son in the late 1960s. This group was called the Irish Distillers Group and they built the new distillery next to the old one - this is now the largest in Ireland and one of the largest in Europe with an annual capacity of 19 million litres. Other famous whiskey names produced there include Jameson, Paddy and Tullamore Dew.

To celebrate the launch, Irish Distillers Ltd have just launched an excellent new website to support the range.  It gives detailed history about Irish whiskey and the Midleton distilleries, explains about the single pot still process and each of the whiskies and gives you the chance to join their exclusive Stillman's Club.  However, the highlight is a series of fantastic informative videos about the range and Irish industry in general - these are hosted by writer Peter Mulryan, who is a world authority on Irish whiskey.  Check out the website at www.singlepotstill.com. 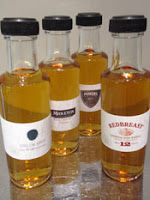 When the whiskies were released back in May, we did not get the chance to taste or review them.  However, luckily for us we received a lovely parcel the other day that was to celebrate the launch of the new website.  It contained samples of each of the four pot still whiskies (pictured, left) - two of which are brand new expressions (the Midleton and Powers), with the other two being new versions of old favourites. So here goes with our tasting notes.

Green Spot
This whiskey gets its name from the green spot which was painted on the end of its maturation casks in the old days.  This would denote its age, which used to be 10 years, with other ages in the range having different coloured spots.  Only Green Spot survives today, albeit as a slightly younger expression.  Only around 1,200 bottles are released each year, so this can be hard to find.

The colour is a bright golden yellow and the nose sends your nostrils a clear message - this is going to be interesting.  There are aromas of sweet vanilla and honey, robust cereals and coconut, but with a pleasant dash of something floral (think of honeysuckle) and something tangy/zesty.  There is also a hint of green pear in there. This tangy nature is the first thing that translates on the palate and while it is hard to distinguish on the nose, it is definitely orangey here.  Then it softens dramatically and feels soft and gentle with plenty of creamy coconut, vanilla and honey.  Wood spices come through (imagine cinnamon and nutmeg), as do some bittersweet barley grains - this tempers the sweetness well.  The finish is delicate with the grainy and honey notes lingering longest.

Midleton Barry Crockett Legacy
This brand new whiskey is named after the current Master Distiller at the Midleton distillery and is a whiskey which he feels encapsulates the very essence of what an Irish pot still whiskey should be.  Barry has hand selected each cask to be included in this release.  Whiskies released under the Midleton name, such as the well loved Midleton Rare, are regarded as some of the finest examples of the pot still style.

The colour is golden yellow with a hint of amber and the nose is expressive, fragrant and classy.  There is initially plenty of robust cereals and coconut, which begin to mingle with vanilla, honey and sugary caramel aromas with time.  Then comes something nutty (imagine toasted almonds), some delicate wood spices (especially cedarwood and cinnamon) plus a hint of dried tropical fruit (think of mango and pineapple).  If it tastes half as good as it smells, we are in for a big treat.  On the palate this is so soft and gentle to begin with but packed with flavours.  The delicious tropical fruit notes hit first and are supported by plenty of oak and grain, which grip your taste buds.  Then comes vanilla, honey, coconut and hints of sultana, cinnamon and apple.  On the finish the initial sweeter notes become spicier and quite refreshingly dry.  This is a classic.

Powers John's Lane
This brand new whiskey is named after the former Powers John's Lane distillery in Dublin, which was originally founded in 1791.  At the time Powers was one of the industry pioneers, as it was one of the first distilleries to follow the traditional Irish practice of triple distillation. The Powers Gold Label is one of Ireland's best sellers, shifting 2.5 million bottles a year.

The colour is golden with a touch of amber and the nose is filled with lovely, promising sweet aromas.   There is an initial combination of cereal grains, vanilla, caramel and brown sugar.  With time in the glass, some dried fruit (especially sultana) and oak start to come through, as does some pleasant cedarwood and cinnamon spice notes, plus a hint of peach.  On the palate, this hits you with a dry, quite tannic oak and wood spice mix, before softening to give balance and depth with vanilla, cereal and soft dried fruit notes (sultana again with a hint of candied orange peel).  It feels lovely and creamy, but with a good grip and freshness on the taste buds.  The balance between the sweet and dry notes is very good.  The finish is full of sugary barley grains, which again are balanced superbly by a good dose of oaky, woody spices.

Redbreast 12 years old
As the story goes, Redbreast is named after the robin redbreast bird thanks to the red tint of the whiskey.  It, along with Green Spot, has been the mainstay of the Irish pot still whiskey industry for many years and has a cupboard full of awards to back that up.  This and its older 15 years old sibling remain two of our favourite Irish whiskies.

It does indeed have a slight reddish tinge but is largely golden amber in colour. The nose is rich, fragrant and fresh with initial aromas of creamy vanilla, honey and green fruitiness (think of fresh apples and pears). Underneath are notes of malted cereals, oak and rich, deep spices (especially nutmeg). On the palate, this whiskey is rich, creamy, mouthcoating and delicious.  The honey and vanilla notes from the nose are are joined by some dried fruit (imagine raisins and sultanas), ginger and further spiciness (think of cinnamon and a pinch of black pepper, in addition to the nutmeg) right at the end. The pleasant cereal and oak notes add to the rounded, creamy feeling as does a hint of coconut. The finish is long, complex and very well balanced. This is a top dram and one that we are glad to see has remained the same.

What's the verdict?
The quality of this range is excellent.  The Green Spot and Redbreast were already well loved and regarded and Irish Distillers Ltd have remained true to these two whiskies, while complimented them with the addition of the new Midleton and Powers expressions.  The Redbreast, and especially the Midleton, are absolute crackers and the other two are not too far behind.  They are clearly well made and as a result all would be accessible to anyone wanting to try Irish whiskies for the first time.  There is no harshness, which is sometimes associated with cheaper Irish blends, but just pleasant warming richness and spiciness.
posted by Matt C at 7:08 AM

Great post. Dominic kindly gave me a sample of the B. C Legacy at Pure and I was very impressed. Need to re-taste and do notes but first impressions were very positive :-)

IDL is spoiling us. A cask strength Redbreast 12 year old was announced a few days ago.