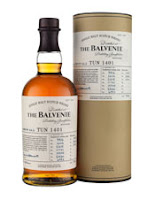 This second batch of the Balvenie Tun 1401 was released during the early Summer.  The first batch of this limited edition whisky, which was created by the Balvenie's experienced Malt Master David Stewart, has already gone down in legend.  This made the release of this second batch highly anticipated. The first batch, which was released in 2010, contained just 336 bottles and was only on sale at the distillery shop.  Thankfully, the second release consists of more bottles (just under 3,000) and has been distributed in the UK and small amounts to selected other markets around the world.

The Balvenie distillery is located in the famous Scottish whisky town of Dufftown in the heart of the Speyside region. It is one of the largest and most famous in Scotland with an annual production level of 5.5 million litres. Balvenie is still owned by the original founders, the innovative William Grant & Sons, and was built in 1892 to help their other overworked distillery at Glenfiddich, which is next door.  Balvenie is a unique distillery - it has its  own floor maltings (the room used for the germination of the barley), a cooperage where they construct casks and they even grow some of the barley used for production within the distillery grounds. Most of these processes are carried out by external companies in the modern whisky industry.  Each year over 1.5 million bottles of Balvenie are sold across the world, putting it well inside the top 10 for total sales of single malt, and this continues to grow.

So, how is this whisky made and what is the significance of the name? To produce it David Stewart selected 10 premium casks from his warehouses and these have been put together in a vessel called a tun.  This is a large barrel/cask, which is traditionally made of oak, where different whiskies are allowed to 'marry together' for some time.  In this batch, he chose to again use one of the finest tuns at Balvenie for this marrying process - tun number 1401 - which took three months. The range of the 10 casks selected is interesting - one from 1967, one from 1989 and the other eight from the 1970s, mostly the early part of the decade.  Seven are ex-bourbon casks and three are ex-sherry casks. The Tun 1401 Batch 2 has an alcohol strength of 50.6% ABV and is available from specialist retailers for £150 a bottle.

Our tasting notes
The colour of this whisky is golden amber and the nose is deep, rich and complex.  There is plenty going on here with aromas combining well and grabbing your attention. There is an immediate hit of tangy candied orange peel with is mellowed by soft vanilla, honey and cereal aromas. Then come further aromas of dark dried fruit (think of raisins, dates, prunes and figs), slightly burnt caramel and soft wood spices, such as cedarwood, cinnamon and nutmeg.  The nose is very tempting.  On the palate, the age of the whiskies involved becomes clear.  It feels soft and velvety, despite the strength, but is lifted by the tangy candied orange from the nose.  The depth and complexity covers many notes - caramel, honey and vanilla offer sweetness, dark dried fruits and cereals offer something bittersweet and the wood spices give pleasant dryness and bite.  There are also notes of dark chocolate, fresh espresso coffee and dried tropical fruits (imagine pineapple and mango especially) adding to the character.  The finish is fantastically long with notes of spiced orange, dried fruit (both the dark and tropical ones from the palate) and drying oak lingering longest.

Although this whisky is very rounded and balanced as it is, the high ABV strength tends to suggest adding a dash of water.  Upon doing this, the tropical notes seen on the palate and finish also appear prominently on the nose.  The tangy orange is reduced, while the honey aromas increase.  A similar thing happens on the palate - the tropical and honey notes are more prominent, as is the chocolate and coffee bitterness.  The finish is a little shorter, with less dryness and more honey and vanilla than before, plus some brown sugar notes.

What's the verdict?
We are fans of most things Balvenie - the Doublewood 12 years old was one of the first whiskies to get us 'interested' in whisky and the Golden Cask 14 years old remains one of our all-time favourites - but on the occasions that we have tasted older expressions, we have left slightly disappointed.  Not here - this is a simply fantastic whisky that is packed full of interest, complexity and depth.  It is in a whisky like this that the skill of the master blender is evident, as he has married 10 highly individual casks in to one beautiful and balanced single malt whisky.