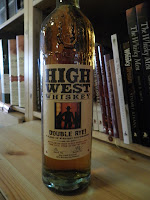 ﻿One of a vast array of new craft distillers popping up all over the U.S. , High West Distillery and Saloon was started in 2007 in the former 19th Century frontier town of Park City, Utah, deep within the Rocky Mountains in the western United States. The brainchild of David Perkins, the small distillery started production in 2007 with a mission to revive the whiskey making tradition in Utah and to make great Rocky Mountain whiskey (presumably because its better than making rubbish Rocky Mountain whiskey).

As well as the distillery there is also a thriving Saloon which you can apparently Ski too if you’re so inclined (do you see what i did there?). No mention on their website as to whether the barman slides your glass of whiskey at prodigious speed along the bar towards you but I’d like to think that they do. They should do.

These guys release a number of different whiskies all taking their cues from the American whiskey tradition with a definite bias towards Rye Whiskey. Rye is defined as having at least 51% Rye within the mash bill with the rest of the recipe almost always consisting of Corn and malted Barley. The principle whiskey within the United States prior to Prohibition in the 1920s, Rye whiskey was made all over the States, one of the more famous areas of production being Pennsylvania. Rye whiskey’s fortunes never really recovered after Prohibition, unlike its more accessible cousin Bourbon but was (still is) made sparingly by nearly all the major Kentucky distillers. Nowadays, Rye is on the march again and sales are growing.

Being a small craft distiller High West are a little bit more open to experiment and so their Ryes are a little bit different from those you might buy from the more established distillers. The mash bills consist of an unusually high proportion of Rye and some are a blend of both very old and very young whisky. Which brings me on a slight thorny issue among some. The older whiskies are not from the High West Distillery but bought from another unspecified distillery, which, given the location of all the major whiskey distilleries in the U.S.A., would not have anything to do with Utah, the Rocky Mountains, or Cowboys. I don’t have a problem with this myself as they’re pretty clear about this on the label.

Our tasting notes
What’s immediately evident is the shear intensity of the aromas that come at you on first nosing. This is going to be interesting at the very least. Big, expressive aromas of spearmint, toothpaste and gin botanicals, most notably juniper. Very odd but great. There’s a bit of sweetness in there as well, a bit of boiled sweets, and honey. The more it breathes the more spicy the aromas become, I can smell black pepper and cloves. Behind all this there’s also a subtle damp earthy note and a lovely sharp pine needle/Christmas tree smell also a little gristy, porridge oats aroma. An excellent, intense and unusual nose. What the hell is this going to taste like!? On the palate it’s initially not as expressive as the nose will have you believe. Sweet flavours such as honey, toffee, sweet corn come through first but quickly give way to extremely intense, hot, spicy, peppery flavours. Very intense but great, with a lovely chewy mouth feel. There’s also a little savoury note throughout that reminds me of tortillas. Very drinkable, despite the intensity the alcohol doesn’t come through much at all, surprising given there’s some very young whiskey in the bottle.

What’s the verdict?
I very rarely buy a bottle of whiskey more than once but for this whiskey I might just break that rule. Very unique, very intense and very good. If you’ve ever wondered what people meant when they said Rye whiskies were supposed to be spicy, try this one!

High West’s whiskies are available throughout the United States and Canada for around $40 and can be found for around £45 from specialist retailers in the UK.

Matt, High West Double Rye is indeed a great whiskey and is partly responsible for the exponential surge of interest in rye whiskey in the US in the last couple of years. In a recent rye tasting with several friends, High West Double Rye and Willett Single Barrel Rye were the winners, although the crowded field included some perennial sweethearts such as Sazerac 18yo. The 95% rye in High West (and for Willett, for that matter) comes from Lawrenceburg Distillery Indiana. Rye is often seen as the Islay of American whiskey. You mentioned buying another bottle - I have stashed away a few...
Thanks for the interesting blog!

High West has sourced a lot of their whiskey but they are unusually forthcoming about it. For instance, here's the link to their double rye mashbill (, along with the sources of each component:

Since you enjoyed this, I think you'll really enjoy their higher-end expression called Rendezvous (blend of 6 year ldi rye and 16 year rye from Barton's):
http://www.highwest.com/spirits/rendezvous-rye/#tab3


Lastly, as a scotch drinker, should you ever have the opportunity you need to try Campfire (blend of ldi bourbon, rye, and an unspecified blended, high peat scotch):
http://www.highwest.com/spirits/new-campfire/#tab3

Campfire, in particular, is a baffling spirit. That's not to say it isn't tasty, but a blind tasting will have you struggling to categorize it.

Btw, I've no affiliation with HW. I'm simply a humble town drunk who has high regard for their products.