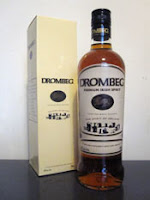 Being St. Patrick’s Day, we thought we’d celebrate with some Irish whiskey, but then we discovered something a little different and very new – Drombeg Premium Irish Spirit. After a brief meeting with one of the founders, Gerard McCarthy, this spirit caught our imagination. It was the story behind the creation of this spirit, its unique production method and the three men who put inspiration and hard work together to invent and develop it.

The ethos behind the creation of Drombeg was to create a new product for consumers. Most brown/dark spirits on the market, such as brandy, whisky or rum, are released at a strength of 40% ABV or above. Most whisky based liqueurs are released between 18-25% ABV and are highly sweetened or have other elements added, such as honey, fruit or herbs. Therefore, John, Denis and Gerard saw a niche in the market for a pure and lower strength brown/dark spirit that had no sweeteners or other ingredients added.

Drombeg is a spirit that is produced in a small batch process using a second-hand still, local ingredients and still local spring water to bring to bottling strength of a lighter 22% ABV. It is produced using a proprietary method whereby oak shavings are added to the new spirit and aged in stainless steel for around a month. The oak shavings allow the influence of the oak on the spirit to occur far more rapidly than when laid down in an oak cask.

Drombeg was invented by three school friends, John O’Connell and cousins, Denis McCarthy and Gerard McCarthy, with the assistance of the former master blender at Irish Distillers, Dr Barry Walsh. The three friends are small independent distillers based in the pretty fishing village of Union Hall, West Cork, Ireland. They decided to name their product Drombeg, after Ireland’s oldest stone circle which is located near Union Hall and dates back to 150BC. Drombeg was launched April 2011, after a three-year long process of development, extensive research, planning and preparation. Drombeg is the first creation from Glanmara Ltd. They say that new spirits will be released in the near future and that some spirit is being laid down in oak casks for future release as whiskey.

Before starting in the spirits business John worked with technical companies such as Unilever, while Denis and Gerard were fulltime fishermen. They still fish a bit, but with fishing restricted to 100 days a year and the ever increasing expense of diesel, the boys, like many other fisherman, find making a living on the sea very hard. They all decided that diversifying into the whiskey business while staying in their hometown was their next big challenge.

Our tasting notes
The spirit is a rich amber colour and the nose is sweet and rich but thanks to the lower ABV quite soft and approachable. With vanilla, warm baking spices (like cinnamon and nutmeg), hard butterscotch sweets and grainy cereal aromas the nose is not overly complex but it is pleasant and promising for such a young spirit.

The palate is sweet and, unlike many whisky liqueurs that have sugary thickness, it is quite light and vibrant, verging on the side of thin and delicate in the mouth. The initial flavour is of heavy butterscotch, honey and loads of vanilla. Some of the spirit graininess then refreshes the palate while the wood spices (especially cinnamon and clove) add a level of interest. There is still some of the youthful rawness to remind you that you are drinking a young spirit but this actually compliments the experience and balances the level of sweetness helping to make the finish bitter-sweet. The finish is quite short and uncomplicated.

For us, this is pleasant enough neat but not the way we would choose to drink it. It works well over ice which makes the graininess stand out and pushes back the sweetness. It would also make an ideal mixer or component to a cocktail. It is the type of spirit that would make an enjoyable long drink on a warm summer’s day. As intended, the lower strength makes Drombeg approachable and therefore could be a good introduction for a whisky beginner.

At present Drombeg is only available in Ireland for around €15, but expect to start seeing it in more locations as distribution is rolled out over the next years. For more information on Drombeg, have a look at their website, www.drombeg.org
posted by Karen at 6:06 PM

I came across your Drombeg whiskey jn my local Super Value here in Skerries and right away i fell in love with it but alas they are out of it this while back -- i am looking around for it ang hope to find it soon ---any tips where ...Frank

Dunnes Stores are stocking it.

Yes I bought some today in Dunnes, Ballyvolane , Cork. for 11€. ( Ridiculously cheap. )
A bit deceptive as it is not till I looked up some on line analysise that I found its not really a REAL whiskey but designed to be mixed as a long drink liqueur, like baileys cream. I think on a hot summer evening it might be good as a long drink mixed with some ginger ale and ice for instance. Will try it and let you know, I hope?