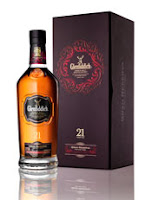 The world famous Glenfiddich distillery have re-launched the 21 years old expression in to their core single malt range.  The liquid remains the same as in the previous release - this has been matured in a complex combination of first and second fill ex-bourbon casks, plus a small amount of ex-sherry cask matured whisky.  These are 'married' together before being transferred for a short maturation in ex-Caribbean rum casks. It is bottled at 40% ABV and should cost around £99.

The re-vamp includes both a new name, bottle shape and box.  This 21 years old is now named Gran Reserva and is released in the bottle used for their premium and limited edition whiskies.  This bottle is a broader, thicker version of the classic three-sided bottle used for the younger expressions in the core range (eg, the 12, 15 and 18 year age statements).  The packaging has been taken to a different level, with the old tube replaced by a sturdy presentation box containing an information booklet.

As mentioned, Glenfiddich is the most famous whisky distillery and single malt brand in the world. It sells the most Scotch single malt of anyone, and by a mile. The distillery is located on the outskirts of the town of Dufftown in the Speyside region of Scotland. The name is taken from the Glen Fiddich, the valley in which it lies and translates as 'valley of the deer' from Gaelic.

Our tasting notes
The colour is an orange amber and the nose is rich and sweet. There are heavy sugary aromas to begin with and these are reminiscent of toffee and caramel.  Then some sweet vanilla aromas come through, as do those of dried fruits (especially sultanas and figs), a hint of tangy candied orange peel and some lovely tropical fruit notes - there is a definite ripe banana note and a whiff of mango.

On the palate, this whisky feels creamy, rich and luxurious with a lovely sweetness that coats the mouth.  Again this sweetness is driven by the notes of toffee and caramel, plus some crumbly brown sugar.  This is complimented by some exaggerated vanilla, which adds to the creaminess.  The combination is reminiscent of a good crème brûlée.  As with the nose, there are other elements which add depth and complexity to the flavour profile - tangy bittersweet orange zest (this gives the whisky as vibrant, fresh lift and stops it being too sweet and cloying), dried sultanas and figs, plus a subtle pinch of cinnamon and nutmeg.  The addition of water makes it even softer and creamier with the sugary notes seemingly even sweeter.

The finish is of decent length and has lovely notes of burnt sugar and toffee, which combine well with the bittersweet orange and sweet vanilla notes.  The dried fruitiness is also there and as the flavours of the whisky fade, a distinct drying wood spice rounds things off.

What's the verdict?
This new version of the Glenfiddich 21 years old oozes class and is a delicious single malt.  There is no getting away from the fact that it is sweet but complex combination of casks works well and creates a whisky that has plenty of depth and interest beyond that.  The extra sweetness beefs up the classic subtle, soft characteristics of the younger Glenfiddichs and the final result is excellent.  Our only gripe is that the price is maybe a few pounds too high ... but only a few.
posted by Matt C at 7:01 PM