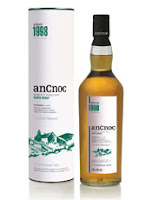 AnCnoc - New Vintage released
Inver House Distillers, the owners of AnCnoc, have announced the release of the latest in their increasing line of Vintage expressions.  This one was distilled in 1998 and has been matured in a combination of ex-bourbon and ex-sherry casks.  There are to be just 5,100 bottles and the whisky is being released at 46% ABV.  It will appear in March in selected markets - France, Germany, Japan, Russia and the UK. As yet, no pricing information is available.

Ballantine's - Four new whiskies
The popular range of blended Scotch whiskies have announced four new expressions to be sold through the travel retail sector. These whiskies form the new Signature Distillery Editions. The first is 17 years old and based around the Glenburgie distillery, which is regarded as 'the heart of the Ballantine's blend'. The other three will see a staggered release over the next three years. They will be of the same age and based around the Scapa, Miltonduff and Glentauchers distilleries.

The Glenburgie edition will be placed in European and Asian travel retail and has been specially created by Ballantine's Master Blender Sandy Hyslop. Sandy says of the release,  “Glenburgie has played a central role for many generations of Ballantine’s Master Blenders. This stunning limited edition offers the whisky drinker a unique insight to the role that Glenburgie malt plays in the original and much-celebrated Ballantine’s 17yo blend".

Jewish Single Malt Whisky Society - Now in business
The JSMWS (let's call it that for short!) is a new membership club that has been formed by our good friends Josh Hatton and Jason Johnstone-Yellin.  It has grown from Josh's popular JSMWS blog and is now dedicated to sourcing and bottling some of the finest single malt Scotch whiskies that they can, while remaining faithful to the needs of the religion.

The Society has three tiers of membership priced at $180, $480 and $960 - these prices cover a year of membership, with a proposed $36 per year renewal fee after that.  For details of what you get within each price bracket and for further information about the Society, please visit www.jsmws.com. having spoken to Jason recently, he pointed out that you do not have to be Jewish to sign up because it's all about the whisky - "whisky first, Jewish second ..." as he put it.

This week, a new venture has been launched by The Whisky Shop - the UK's largest specialist whisky retail chain. The W Club is a private membership club which offers plenty for the whisky consumer and fan. There is a new website and blog, which are being edited by whisky journalist Dominic Roskrow, in addition to a permanent 10% discount on all products that The Whisky Shop stock (this discount applies in any of the chain's 18 UK stores and through their website).

Other membership benefits include access to limited edition and exclusive bottlings, entry in to 'money can't buy' competitions, special tasting events and distillery tours.  Membership costs just £12.50 a year or £25 a year for a special membership welcome pack. To complete your membership, please go to www.thewclub.co.uk.  If you don't wish to join, then you can still see various parts of the site, which is packed with new information.

The Whisky Lounge - Fest! returns to London
The popular whisky show has announced its return to London after a year off. The Lounge's co-founders, husband and wife team Eddie and Amanda Ludlow, are hosting the London 2012 show at The Royal Horticultural Halls on Saturday 21 April.  Previous shows around the UK have been given much praise and press as Eddie and Amanda try to present whisky to beginners and connoisseurs alike, but in a relaxed, informal way - their tag line of 'Bringing whisky to the people' says it all really.

The London show includes over 30 stands, tutored tasting sessions, food and whisky matching demonstrations and a 'live blogging area'.  There are two sessions - 11am to 3pm and then 4pm to 8pm - and tickets are £40 each per session.  To book your tickets for the Fest! - please visit www.thewhiskylounge.com and follow the links to the London event. We hope to see you there ...
posted by Whisky For Everyone at 7:21 PM