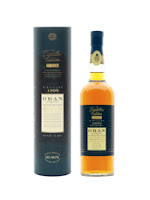 The Oban distillery is one of the oldest that is still in operation in Scotland.  It was founded in 1794 by John and Hugh Stevenson on the site of a former brewery, and is located in the coastal town of Oban in the west Highlands.  The distillery is currently owned by Diageo and is one of the smallest in their estate of 28 single malt distilleries with an annual production capacity of just 650,000 litres.  As a result, the core range consists of just two bottlings - this Distillers Edition and a 14 years old.  These are occasionally joined by rare, older limited editions.

Oban rose to prominence in the late 1980s when it was included in the Classic Malts range, which was created by previous owners United Distillers.  This range was designed to highlight the regional varieties within their single malt portfolio, and Oban was selected to represent the western Highland region. The Classic Malts range has been continued by Diageo and the Oban 14 years old expression continues to be part of it.  Other well regarded names in the range include Clynelish from the north HIghlands, Cragganmore from Speyside, Glenkinchie from the Lowlands, Dalwhinnie from the central Highlands and Lagavulin from Islay.

The Distillers Edition series was devised by Diageo to be a creative extension of the Classic Malts.  Within the range the Classic Malts are finished (or 'double matured' as the labels state) in alternative casks, which have previously held sherry or another fortified wine.  The Oban Distillers Edition is essentially the 14 years old expression, which is then finished for a short period of time in ex-Montilla Fino sherry casks.  The version than we are tasting here was distilled in 1995 and bottled in 2010 at a strength of 43% ABV.  Oban Distillers Edition should cost around £60-65 from specialist whisky retailers.

Our tasting notes
The colour is golden amber and the nose has plenty of immediate sweetness, especially aromas of toffee, caramel and honey.  Underneath are some dark dried fruits - think of raisins and sultanas, plus an increasing aroma of candied orange peel.  The toffee aromas continue to dominate but other notes appear with time.  Some malty cereal and cinnamon add depth, along with something earthy which is reminiscent of ginseng.

On the palate this feels initially soft, gentle and viscous, before becoming more tangy later on.  There is again a fudgey, toffee-like note much like on the nose and these are backed up by some sweet malty cereals, dark dried fruits (imagine raisins, sultanas and especially bitter orange peel) and some honey.  There are also hints of something nutty and treacle-like, which is reminiscent of peanut brittle or caramelised almonds.  A salty tang begins to develop, as does an increasingly drying note of wood spice (think of cinnamon bark and nutmeg especially).  These salty and spicy notes seem to increase with time and make the palate refreshing and mouthwatering, without being too sweet.

The finish is of decent length and follows the same pattern as the nose and palate - it begins sweetly with notes of toffee, fudge and dried fruit predominant, before the malty cereals take hold along with the drying woody spices and salty brine-like notes.

What's the verdict?
The Oban Distillers Edition is a good, solid whisky that is enjoyable and easy to drink with plenty of aroma and flavour to hold the attention. Fans of the regular Oban 14 years old should search this out and try it.  It is richer, sweeter and then drier on the finish than the regular bottling from memory.  We also like the concept of the Distillers Edition range that puts a creative twist on a 'classic' expression of a whisky.  We look forward to trying some more from the range.

My first taste of Oban was in 1998 when I became was introduced to the 1980 Distillers Edition. I am now hooked and am currently sitting down enjoying the 1998 edition. I cannot think of anything better on a cold winters day than supping Oban.