Within Inbox we aim to write a few lines detailing each press release/piece of news/PR event that we have received and provide links, where possible, for you to find out further information.  Here is the news that has attracted our attention this week.  There's a bit to get through so grab a whisky, sit back and enjoy ...

Berry Brothers & Rudd - In 7th heaven
The famous wine and spirits retailer has announced the latest releases of its highly acclaimed Blue Hanger blended whisky. The 7th Edition has been created by BBR's Master Blender Doug McIvor from just eight casks (1x butt Bunnahabhain 1990, 1x hogshead Bruichladdich 1992, 4x hogsheads Miltonduff 1997 and 2x hogsheads peated Bunnahabhain 2006) and there are just 3,088 bottles as a result.  It is bottled exclusively for the US market at 45.6% ABV and will cost $99.99 each. 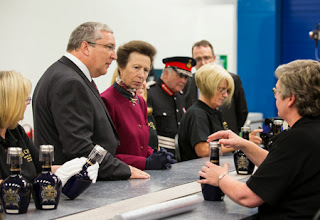 Her Royal Highness The Princess Royal has officially opened the company's new bottling plant, which is located in Paisley, Scotland.  The Prestige Hall, as it has been named, will be where all of Chivas and Pernod Ricard's premium spirits will be bottled - this will include Ballantine's, Chivas Regal, The Glenlivet and Royal Salute brands, plus Beefeater gin.  The plant is designed to be more bespoke and hand crafted, catering to the needs of premium and limited edition bottlings while drawing on the skills of specially selected employees.  Her Royal Highness was shown around by Laurent Lacassagne, the Chairman and CEO of Chivas Brothers.

Drambuie - Prepares early for Xmas
This week saw the first mention of the C-word (Christmas, that is).  The whisky based liqueur brand of Drambuie has announced special packaging, which is designed to stand out on shop shelving and is an extension of their Taste of the Extraordinary promotional campaign.  It features the striking black and white zig-zag motif used across the campaign.  The bottle will be available from early October across four of Drambuie's key markets - Bulgaria, Greece, Malta and the UK - at a cost of £25.

Glenfiddich -125 and counting ...
The world's biggest selling single malt has released a highly limited edition to celebrate the 125th anniversary of the Glenfiddich distillery.  The Glenfiddich Anniversary Vintage is taken from just a single cask, which was selected by Glenfiddich's Malt Master Brian Kinsman and Peter Gordon (the great great grandson of William Grant, who founded Glenfiddich) and this has yielded only 286 bottles.

The spirit used was distilled on Christmas Day 1987, exactly 100 years after the first spirit flowed from the stills at Glenfiddich.  The selected cask has been bottled at the natural cask strength of 55.2% ABV.  The limited nature of the release means that allocations to worldwide markets are small.  For example, there are just 18 bottles available for the UK.  Each will have a recommended retail price of £699. 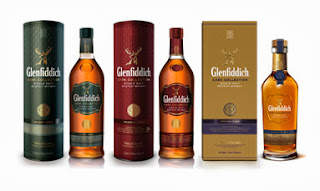 More news from Glenfiddich, this time in the form of a new collection of three single malts exclusively for the travel retail market .  The Glenfiddich Cask Collection includes the Select Cask, the Reserve Cask and the Vintage Cask.  These will be priced at £39, £49 and £79 respectively.  The Select Cask and Reserve Cask are available now in selected travel retail market, with the Vintage Cask available from early 2014 - the collection will be rolled out globally at the same time.  All are bottled at 40% ABV.

Malt Whisky Yearbook
Our favourite whisky book has announced the imminent release of the latest edition on October 1.  The Malt Whisky Yearbook 2014 by Ingvar Ronde makes essential reading for whisky beginners and connoisseurs alike.  This year's edition is the biggest yet with 300 pages and over 500 photos.  It features an expanded distillery profile section, articles on hot topics by whisky writers, tasting notes, news from the whisky industry with statistics, a new section on independent bottling companies, plus information on good websites and shops to visit. 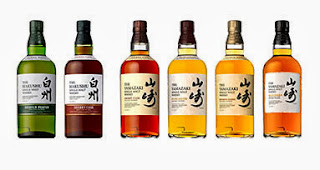 The Japanese whisky company of Suntory have announced the details of their annual cask collection.  This year's bottlings run in conjunction with the company's 90th anniversary celebrations.  The releases follow the lines of previous years and has two limited editions of Hakusku (the Heavily Peated and the Sherry Cask) and four of Yamazaki (the Bourbon Cask, the Puncheon Cask, the Sherry Cask and the Mizunara Cask).  The Yamazakis are all priced at £100 a bottle, with the Mizunara Cask priced at £250.  Prices for the Hakushus or quantities of each bottling have not been released to date.  All will be available from early-mid November.

Get all the best alcoholic drinks at Duty Free Depot!