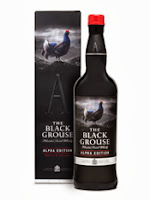 The Alpha Edition is the latest expression to be added to the hugely popular Grouse range of blended whiskies.  The whisky was launched back in August and is being marketed as a richer, smokier version of The Black Grouse.  It has been created using a higher percentage of peaty whisky, including some of much greater age, than in the rest of the Grouse range. Despite just being released, the Alpha Edition has already bagged a gold medal at the recent International Spirits Challenge 2013.

The Grouse brand is owned by the Edrington Group and the range includes the popular Famous Grouse (the UK’s number one selling whisky), the Black Grouse (a smoky, peaty version), the Naked Grouse (a premium version made with a high percentage of single malt) and the Snow Grouse (a grain whisky designed to be chilled).  The brand was first created by a company called Matthew Gloag & Son. The company was set up in 1800 by Matthew Gloag in the town of Perth and was originally a wine merchant and importer. They supplied wine to Queen Victoria, amongst other wealthy clients.

In 1860, Matthew's son William took over and started buying whisky from various distilleries around Scotland and blending them, as was the trend at the time. The popularity of his blends grew and in 1896, his son (also called Matthew) launched The Grouse, which later became The Famous Grouse in 1905. The iconic grouse logo was a pencil drawing by Matthew's daughter and a version is still used on the label of the The Famous Grouse today.

The Black Grouse Alpha Edition is presented a in gift box with a glossy red interior and the bottle is made from black glass.  This is topped with a red top, which reflects the red crest of the black grouse after which the whisky is named.  It is bottled at 40% ABV and is currently exclusive to the Waitrose chain in the UK.  A bottle will cost £36.49.

Our tasting notes
The colour is golden yellow with a hint of amber and the nose is surprisingly light to begin with.  Initial aromas include honey and some prominent woody spices (think of fresh wood shavings, coconut and cinnamon).  Further aromas of toffee and caramel come through, as do some dark dried fruits (especially raisins) and hints of bitter orange and treacle.  The advertised smokiness seems quite mild at this point and has an earthy, almost cigarbox-like edge to it.

On the palate, the whisky feels soft, gentle and creamy.  It is mouth coating and very pleasant.  There are initial notes of toffee, malty cereals and butterscotch, along with a hint of tangy bitter orange peel.  These are followed up by some dark dried fruits (especially the raisins from the nose plus sultanas and some sort of dried berry, not sure which one though).  The peaty, smoky element is more noticeable than on the nose and adds a lovely warm earthiness to the whisky.  It is reminiscent of damp moss and soil.  Underneath all of the above are some gripping spices, which are reminiscent of cinnamon, nutmeg and ginger root.  There is a late hint of liquorice and menthol.

The finish is on the short side.  The sweet toffee and dried fruit notes seem to disappear quickly, leaving a mouth drying combination of woody spices and earthy peat smoke.  This peat smoke seems to grow and linger for a short time, before it too disappears.

What's the verdict?
The Black Grouse Alpha Edition is a very pleasing whisky and one that is enjoyable to sip on.  The nose is lovely and promises much.  The palate is good and shows plenty of characteristics, which add a decent depth and complexity.  The finish is the slightly disappointing aspect of this whisky - it is short and a little sharp, but is certainly no 'deal breaker'.

When researching for this post, it was noted somewhere that this was "a peaty whisky for people who don't think they like peaty whiskies".  It is a good comment.  Although this is advertised as a 'richer, smokier version of The Black Grouse', the peat is actually quite mild and only really comes to the fore during the finish.  This is no bad thing and the Alpha Edition is a welcome addition to the Grouse family.

I appreciated this very thorough post - and I always salute blog features which put blends under the microscope!
The one and only encounter I have had with the Black Grouse was not positive but I am a very big fan of another 'peatier' version of a peaty blend: Johnnie Walker Double Black. We shall see if mine and Alpha's paths cross in the near future as I have broadly good things to say about the Naked Grouse.
Many thanks.