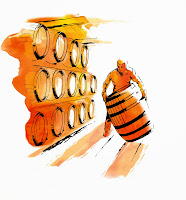 Glenmorangie - Name is 'chosen'
Stage two of the Glenmorangie Cask Masters has now concluded and has seen the public vote for the name of a forthcoming single malt release.  This follows the first stage which saw the actual liquid selected from three contenders.  In case you've missed it, the whisky that won the vote was Cask C that has been part matured in ex-Manzanilla sherry casks.

The name for this single malt will be Taghta (which means 'choice' or 'chosen' in Gaelic and is pronounced tuh-ta).  This beat Coileanta (Gaelic for 'mastery') and Saliann (Gaelic for 'salt' or 'salty') in to second and third place respectively.  The three prospective names were selected from thousands submitted by the public from all over the world by Dr. Aonghas MacCoinnich, an expert in all things Gaelic.

The next stage of the Cask Masters will see the public design and select the packaging for the forthcoming release.  For more information about the initiative and the next stage, visit www.glenmorangie.com/caskmasters.

Hankey Bannister - Life begins at 40
The blended whisky brand of Hankey bannister have announced the release of a 40 years old expression.  This follows a first small batch, which was released back in 2007.  There will be just 1,480 bottles available, which will see a staggered release over a three year period.  The first release will be of 500 bottles and will be put in to key markets for the brand.

The casks used in the creation of this whisky have been hand selected by Stuart Harvey, the Master Blender for Inver House Distillers (the brand's owners).  These include two rare ex-sherry cask matured Highland malts dating from 1967 and 1970, plus some extremely rare Lowland grain whiskies.  The whisky comes presented in a specially designed decanter and casket, and is bottled at the natural cask strength of 44.3% ABV.  It is priced at £800 a bottle. 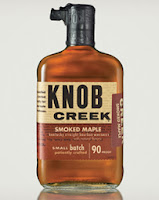 Knob Creek - Brings a new flavour
The American bourbon brand has announced its first foray in to the ever-growing flavoured whisky market with the launch of Knob Creek Smoked Maple Bourbon. It has been created to honour Knob Creek's founder Booker Noe, who once famously said about whisky "drink it any damn way you like". The new expression will be only available in the USA initially and will cost $30.99 for a 750ml bottle.  For more information, please visit www.knobcreek.com.

Laphroaig - Trilogy is completed
The famous smoky single malt brand of Laphroaig has announced the third and final part of its travel retail exclusive range.  The An Cuan Mór (which translates as 'big ocean' from Gaelic) follows on from the QA Cask, which was released earlier this year, and the PX Cask from last year.  It has been matured in a combination of ex-bourbon barrels and ex-European oak casks, and is bottled at 48% ABV.  The recommended retail price is £80/€95. 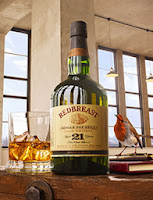 Redbreast -A new member of the family
Irish Distillers Pernod Ricard have announced the addition of another single pot still whiskey to their range in the form of Redbreast 21 years old.  It is the fourth in the award-winning range that already includes the 12 years old, 12 years old Cask Strength and 15 years old expressions. It has been made in the traditional pot still way, using malted and unmalted barley in the mash before being triple distilled in copper pot stills.

The new expression has been aged in a combination of first-fill ex-bourbon and first-fill ex-Oloroso sherry casks.  These have been specially selected by Irish Distillers' Master Blender Billy Leighton, who has been working on the project since 2010.  Initial quantities will be very limited and restricted to Ireland, mainland Europe and the UK.  It will be available in the USA from early 2014.  It has been bottled at 46% ABV and will be priced at €180 for a 70cl bottle.

posted by Whisky For Everyone at 7:27 PM

eToro is the best forex trading platform for novice and full-time traders.