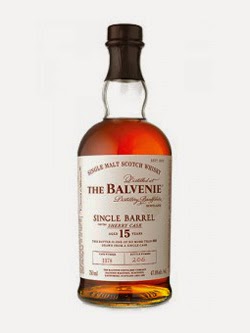 This whisky is the latest addition to the single malt range of the popular Speyside distillery.  The Balvenie Single Barrel 15 years old Sherry Cask replaces the old 15 years old Single Barrel, which has been in the core range for a number of years, and joins the 12 years old Single Barrel First-Fill Bourbon Cask which came out last year. The release will see European oak ex-Oloroso sherry butts bottled one at a time, with no more than 650 bottles ever being available from each cask.

The Balvenie distillery is located in the famous whisky town of Dufftown in the Speyside whisky region of Scotland. It was founded in 1892 by William Grant and is built next to its sister distillery of Glenfiddich. Balvenie is owned by William Grant & Sons and has an annual production capacity of 5.6 million litres. It is regarded as one of the most traditional distilleries in Scotland, as all stages of the whisky making process happen on site in one form or another - this includes growing barley, malting, mashing, fermentation, distillation, coopering and maturation.  Balvenie is one of the best selling single malts in the world and sits comfortably within the Top 10 for sales volume.

Each cask used for this release have been hand selected by David Stewart, the Balvenie Malt Master and industry legend. Bottles are individually hand numbered and include details of the cask such as the cask number, dates of filling and bottling. The new expression will be non chill-filtered and bottled at a strength of 47.7% ABV. It is initially only available in the UK and USA with a recommended retail cost of £75/$100.  For reference, our sample was taken from Cask #16293.

Our tasting notes
The colour is golden amber and the nose is vibrant, rich and full of sumptuous aromas.  The initial aromas are of juicy dark raisins and earthy ginger, and these are backed up by further notes of honeycomb and golden syrup.  Underneath is a lovely nuttiness (think of almonds), hard caramel sweets, cinnamon and some further earthiness.  Fantastic.

On the palate, the whisky feels viscous and mouth coating but with a dry, wood spice edge to it.  This is most reminiscent of a combination of cinnamon and all-spice.  There is an immediate note of caramel sauce and brown sugar, and these are supported by a distinct fruitiness (imagine a mix of tinned peaches and dark juicy raisins).  Further complexity is given by notes of malted barley and dried ginger.  Later there are hints of bitter almonds, orange oil and liquorice. A few drops of water softens the woody spices and makes the whisky feel softer.  The caramel and sugary notes become more fudge and toffee-like, and the raisin and orange notes seem to become more prominent.

The finish is initially rounded and sweet with the caramel and fruity characteristics to the fore.  It is not long before the drying wood spices (especially that cinnamon) starts to take hold and the combine with the orange note in particular.

What's the verdict?
This is another fine effort from Balvenie, although it has to be said that the palate and finish do not quite live up to the expectation which is built up by the fantastic nose.  That is not to say that they are not very good, but the heady aromas contribute to one of the best ex-sherry cask noses that we have sampled for a long time.

It is great to see a brand that caters for all level of consumer within its core range.  This Single Barrel will be mostly of interest to those that have an intermediate or established level of whisky knowledge, and shows the quality of good ex-sherry casks.  This is well worth tracking down and buying.

I had drunk a Balvenie years ago. Was quite an experience!