Within Inbox we aim to write a few lines detailing each press release/piece of news/PR event that we have received and provide links, where possible, for you to find out further information.  Last week we were snowed under with work and other commitments, so we have combined last week's and this week's news into one bumper edition.  Apologies for that.  Here is the news that has caught our attention from the last two weeks ...

Bowmore - Tempest returns
Bowmore, Islay's oldest single malt distillery, has announced the release of the latest batch of its limited edition award-winning Tempest series.  This is the fifth batch and as before the whisky has been matured in first fill ex-bourbon casks.  The Tempest Batch V has been bottled at 10 years of age and at the natural cask strength of 55.9% ABV.  It is also non chill-filtered and of natural colour.  A bottle should cost around the £45-50 mark.

Glenfiddich - A mark of Excellence
The multi award winning single malt brand and distillery of Glenfiddich has announced the release of its latest premium single malt - the Excellence 26 years old.  The new expression is the first Glenfiddich single malt to use ex-bourbon casks throughout its entire maturation.  The whisky comes packaged in an embossed purple box and the bottle features gold lettering and an oak stopper.  It is bottled at 43% ABV and will be available from luxury specialist whisky retailers worldwide.  The cost is £350 a bottle.

Glenfiddich Malt Master Brian Kinsman, who created the Excellence, commented: “By maturing this expression exclusively in Bourbon casks we’ve created a beautifully intense flavour, reflective of the relentless passion we have for producing incredible single malts. This 26-year old, while a new expression, remains true to Glenfiddich’s heritage of producing fruity, floral and deeply flavoured whiskies. We believe it to be one of our most desirable expressions yet, making ‘Excellence’ a truly appropriate name.”

Johnnie Walker - Brings in the Law
The Johnnie Walker blended Scotch brand has announced an exciting collaboration with a leading actor to promote its super premium Blue Label whisky.  Following hot on the heels of ex-footballer David Beckham becoming the face of their new Haig Club whisky, Diageo have enlisted Jude Law to star in a short film.

Entitled The Gentleman's Wager, the film features a man willing to risk everything to attain something that he cannot afford.  It has been directed by Jake Scott and shot in London and the British Virgin Islands.  It also features renowned actor Giancarlo Giannini.  The film is scheduled for a global release at the end of July, but here is a quick trailer ...


The Lakes - Stills arrive
England's newest and largest distillery has moved a step closer to completion with the arrival of its copper pot stills.  The Lakes Distillery, located on the banks of Bassenthwaite Lake in Cumbria, has had three stills (one wash, one spirit and one for gin) hand made by Edinburgh based specialist McMillan and these will be used from September this year.  Each still has a capacity of 5,500 litres and this will allow them to produce one million bottles of English single malt whisky per year, in addition to gin and vodka.  Below is a video documenting the delivery of the stills from Edinburgh to the distillery.  Enjoy ... 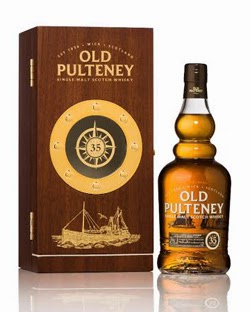 Old Pulteney - New old expression released
The north Highland single malt brand of Old Pulteney has announce the release of a premium old and limited expression.  The new 35 years old has been matured in a combination of ex-bourbon and ex-sherry casks, which were hand selected by Distillery Manager Malcolm Waring.  It has been bottled at 42.5% ABV and is non chill-filtered.  There are just 2,700 bottles and these will be available through specialist retailers worldwide.  A bottle will cost £500.

Margaret Mary Clarke, the Senior Brand Manager for Old Pulteney, commented: “This 35 years old is a world class expression and we are delighted to add another high age, limited edition to our existing portfolio. The new malt is a true reflection of Old Pulteney’s outstanding quality and craftsmanship. We are confident that it will take its place amongst the best luxury whiskies available today and cement our position as one of the UK’s top ten single malts.”

Orphan Barrel - Get rhetorical
The Orphan Barrel Whiskey Distilling Company have announced the release of their third whiskey.  The Rhetoric is aged for 20 years old and hand bottled in Tullahoma, Tennessee at a strength of 90 Proof/45% ABV.  The stock used to create Rhetoric was recently found in the old Stitzel-Weller Warehouses in Louisville, Kentucky and was distilled in both the New and Old Bernheim distilleries.  Further editions will be released annually.  It will be available in selected retailers across the USA and will cost $85 a bottle.

posted by Whisky For Everyone at 7:07 PM

Great stuff. Your post is so informative and helpful. I want to appreciate you for this post.