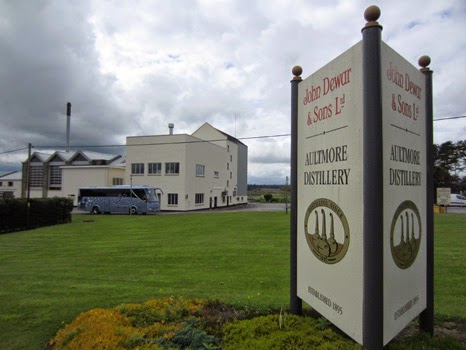 Last Summer, we were delighted to attend a press trip that saw us visit the five single malt distilleries owned by John Dewar & Sons - Aberfeldy, Aultmore, Craigellachie, Macduff and Royal Brackla.  The trip was organised to promote their new series of whiskies entitled The Last Great Malts, which sees most of the distilleries getting a range of single malts for the first time.

This programme began with the revamping of the existing Aberfeldy range, which was followed by the launch of the Craigellachie malts in the Autumn.  At the beginning of December the Aultmore range was launched with 12 and 25 year old expressions appearing in domestic retail and a 21 year old exclusive for travel retail.  Two further bottlings, a 30 and a 35 year old, are planned for release later in 2015.

We felt this a good time to write about our visit to the distillery.  We were particularly interested by Aultmore as it was a place that we knew little about and a distillery that is not open to the public.


Aultmore is located just off the main A96 road between the towns of Keith and Fochabers.  It was founded in 1896 by Alexander Edward, who also owned the Benrinnes distillery and had co-founded Craigellachie, although production did not begin until 1897.  The name is derived from Allt Mòr, the water source for the distillery, and this translates as 'big burn' from Gaelic.

Edward sold Aultmore to John Dewar & Sons in 1923 and it has remained with the company ever since, although Dewars is now part of the larger Bacardi group.  The whisky it produces is an important part of the Dewar's blended Scotch whisky range, in particular the hugely popular White Label.


Our tour guide was Stephen Marshall, the Global Brand Ambassador and creator of The Last Great Malts range.  The distillery has a functional and industrial feel to its architecture.  Aultmore was totally rebuilt in the early 1970s and at that time John Dewar & Sons was owned by Scottish Malt Distillers (SMD).  They rebuilt a number of distilleries and used an unromantic uniform 'kit' that could be altered to fit the size of production.  None of the original buildings from the 1890s remain.


The first stop was the old Porteus mill, which has been at Aultmore since the 1970s refurbishment.  This grinds the malted barley down to the required specification and Stephen informed us that they are currently using the Concerto strain of barley.  Once milled, the barley (or grist as it is known) is transferred to the mash tun.  This where the soluble sugars are extracted with the addition of warm water.


The mash tun at Aultmore seemed huge.  Or maybe it was just that the room it was housed in seemed small.  The tun filled the space and left little room for manoeuvre, especially with a group of ten whisky journalists and bloggers all trying to take photos.  The mash tun can hold 10 tonnes of mash (the name given to the mix of grist and water) and is made of stainless steel.


Aultmore has six wooden washbacks, which are made of larch.  These are housed in a room that starkly contrasts the mashing room.  It is wide, open and airy.  The washbacks have plenty of 'character' and this was the first area of the distillery where we got the sense that it was not open to the public.  The wood was stained and paint peeling.  Each washback holds 46,500 litres of mash.  The fermentation time is 56 hours and in that time yeast is added, which turns the soluble sugars in the mash in to alcohol.  When complete, the liquid (called wash) has an alcoholic strength of around 8% ABV.

Did you know?
In 1898 an Abernethy steam engine was installed to provide consistent power for Aultmore. This was in service until the refurbishment in the 1970s and operated the malt conveyors, mill, mash tun, the internal workings of the wash still and numerous pumps and valves.  Upon decommissioning, it was preserved and now stands on display at the entrance of the distillery.


The still room was also open and airy.  This feeling was accentuated by the large roller windows on the front wall.  These can be rolled up during hot weather to maintain the constant temperature of the stills.  There are two copper wash stills, where the first distillation takes place, and these both have a capacity of 15,500 litres.  The spirit is then distilled for a second time in the two spirit stills and each one works as a pair with one of the wash stills.  The annual capacity of Aultmore is three million litres.


The still room, like the fermentation room, gave a glimpse at a different character within Aultmore than its austere and industrial modern exterior suggested.  There was no polished copper on the stills, no signs for explaining distillation to tourists, no new paint or stillmen in smart uniforms.  This was very much a working distillery that has a 'work horse' like feel to it.  Aultmore is finally getting its chance to shine thanks to Bacardi and John Dewar & Sons releasing the new single malt range.

posted by Whisky For Everyone at 7:42 PM