Within Inbox we aim to write a few lines detailing each press release/piece of news/PR event that we have received and provide links, where possible, for you to find out further information.  January is traditionally a quiet time of the year as the whisky industry wakes up slowly from its festive break but here are a couple of bits of news that has caught our attention from this week ... 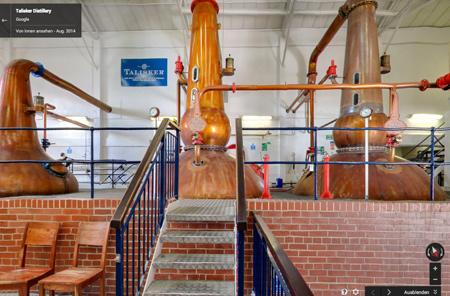 The leading Scotch whisky producer has teamed up with Google Business View to give whisky fans a glimpse inside four of its single malt distilleries.  Diageo are the first to let allow the Google team inside their distilleries and the result for the viewer is a 360° tour of the interiors and exteriors of the four sites from the comfort of your own home via your computer, laptop, tablet or phone.  Above is a screenshot from the Talisker distillery interior.  To take your own personal tours, simply click on the links below.  Enjoy ...

Dr Nicholas Morgan, Head of Whisky Outreach at Diageo comments: “All of our whisky distilleries are unique and all happen to be located in some of the most beautiful places in the world. Many aspire to visit, but only a few can. So we are delighted that this technology can open doors for whisky fans across the world, to give enthusiasts an insight into the craftsmanship and hard work that goes into creating these whiskies.”

Jameson - St. Pat's Day is coming
The leading Irish whiskey brand has revealed the design for its annual St. Patrick's Day limited edition packaging.  This year is the fifth such release and has been designed by Dublin-based illustrator Steve Simpson.  The design is entitled 'Wherever I roam, it's Dublin my heart calls home' and depicts famous Dublin landmarks laid over a map of the city centre.  The bottle will be available in 33 key worldwide markets from early March and will tie in with other brand activity for St. Patrick's Day.  It will cost £19/€24 a bottle.

Daniel Lundberg, the Global Brand Director for Jameson, says: “Jameson is synonymous with its hometown of Dublin – both are steeped in heritage and have infectious and welcoming personalities, so this limited edition bottle is our way of paying homage to this great city. This year’s design successfully captures the synergy between Jameson and Dublin, giving consumers around the world the opportunity to enjoy an authentic St. Patrick’s Day experience wherever they are.”

Glenmorangie - New Private Edition
The north Highland single malt brand of Glenmorangie has announced details of the latest release in its popular annual Private Edition series.  The sixth expression, named Tùsail, marks a change in direction for the series.  Previous expressions have concentrated on the cask used during maturation. Tùsail has been made using an old strain of barley, called Maris Otter, which is more traditionally used in the brewing industry.  The barley is a winter variety and was floor malted to Glenmorangie's specifications.

The new whisky has again been designed by Dr. Bill Lumsden, the Director of Distilling & Whisky Creation at Glenmorangie, and has been matured in bourbon casks.  The name is Gaelic and translates as 'originary'.  It is bottled at 46% ABV.  Tùsail will be available in a limited quantity shortly through specialist whisky retailers and department stores, and will have a recommended retail price of £75.99.

posted by Whisky For Everyone at 7:51 PM