Nantou is a Taiwanese distillery that is owned by the Taiwan Tobacco & Liquor Corporation (TTL for short), who manufacture cigarettes, beer, wine, liqueurs and spirits. The company is state owned and most well known for its Taiwan Beer brand.  They own seven distilleries and two breweries but Nantou is the only one designed for single malt whisky production.  The company was founded in 1947 and maintained a monopoly on all tobacco and alcohol products until 2002.

Taiwanese whisky is increasing in popularity both in Taiwan and internationally, with the award winning Kavalan distillery leading the charge.  Nantou was founded in 1978, but only began production of single malt whisky in 2008.  It is located in Nantou County in central Taiwan.  The malted barley used at the distillery is shipped over from Scotland and whisky production only takes place between October and April, due to the extremely high temperatures of the Taiwanese Summer.

This heat also causes problems during the maturation of the spirit and they experience high evaporation (known as 'the angel's share').  This is about 7% per year compared to the 1-2% level experienced in Scotland.  The distillery is equipped with a mill, mash tun, eight stainless steel washbacks and two pairs of copper pot stills.  Water is taken from the nearby Central Mountain Range for production and the new make spirit is collected at 70% ABV.  They produce around 500,000 litres of single malt at Nantou each year.


Most of the whisky produced at the distillery is used in TTL's range of blended whiskies designed for the Taiwanese market and the only way of getting Nantou single malt in through this range of specially selected single casks.  These single casks bottlings are released occasionally across Taiwan but always sell out rapidly.

We would like to thank Lisa Huang, a long-term friend of Whisky For Everyone, who purchased two bottles from Nantou on a recent trip to Taiwan and then supplied us with a sample of each.  We would also like to Leo Guo at the distillery for supplying the two photos above. 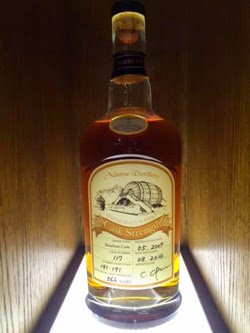 The colour is deep golden yellow and the nose is fresh and very sweet.  The initial aromas are of vanilla, golden syrup and coconut with further aromas of ginger, sponge cake and lemon meringue underneath.  On the palate there is plenty of oaky notes and as these fade, other notes are allowed through - think of vanilla, honey, coconut and candied lemons with some cinnamon and ginger spice in the background.  With time some lovely juicy tropical fruit notes develop especially peach/apricot, papaya and a hint of banana.  The finish becomes increasingly dry as the sweet and fruity notes fade to leave the warming woody and spicy elements.  This gives a pleasant mouth watering feel. 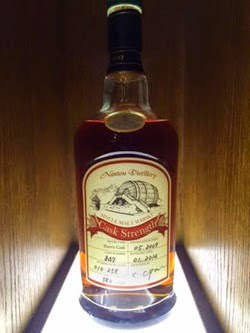 The colour is dark amber and the nose is fresh yet fruity and nutty.  There is plenty of spirit present and other notes fight through this with some persistence - think of caramel, dark treacle, raisins and walnuts in particular.  On the palate this is feisty, savoury and drying.  There is a heavy wood influence and this manifests itself as bitter nuts and cinnamon-like spices.  Then comes a savoury, almost burnt meaty, character.  Only with plenty of time do some sweeter caramel and dried fruits (especially raisins) notes come through to add much need balance.  The finish is surprisingly short, particularly for a sherry cask matured whisky, with the sweet and fruity notes fading almost instantly and the savoury, nutty and woody notes not far behind.

What's the verdict?
It is always interesting to sample whiskies from new distilleries, especially if they are from different parts of the world.  Taiwanese whisky has really risen to the world's attention in the last five years or so, mostly thanks to the work of Kavalan.  Therefore, we were excited to taste Taiwanese single malt from a different producer.

There is a clear winner for us from the two whiskies that we sampled.  The bourbon cask expression is lovely and full of sweet and fresh notes.  It exhibits characteristics, especially those of the tropical fruits, that are more commonly associated with much older bourbon cask matured whiskies.  The sherry cask is a little more challenging and has less intensity, sweetness and length than expected from such a cask.  Both are very interesting and we are glad to add them to our list.