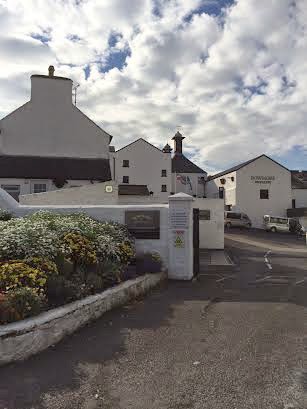 Bowmore is one of the biggest names in the world of Scotch whisky and is known for its peaty and smoky style of single malt. Bowmore, along with Laphroaig, was one of the whiskies that got us in to the peaty flavour and we have admired many of their whiskies since we started Whisky For Everyone.  Therefore, Matt C was delighted when he got invited for a special tour as part of Beam Suntory's Peated Malts of Distinction launch.

Bowmore is located on the Hebridean island of Islay, which is famous for its peaty smoky single malts.  The island is home to eight distilleries - Ardbeg, Bowmore, Bruichladdich, Bunnahabhain, Caol Ila, Kilchoman, Lagavulin and Laphroaig - with other new ones in the pipeline.  Bowmore is the oldest of them all and known as 'le grande dame of Islay'.  It is one of the oldest distilleries in all of Scotland with only Glenturret in the Highlands is older of those that are still in operation.


Bowmore was founded in 1779 by John Simpson and sits on the shores of Loch Indaal, the sea loch that dominates Islay. It is owned by Morrison Bowmore, who have been in control since 1963. They are now part of the larger Beam Suntory drinks company. The core range is extensive and expands across local and travel retail markets – this helps to make Bowmore one of the biggest selling single malts in the smoky/peaty style.


Our tour guide was David Turner, the Distillery Manager at Bowmore.  We began on the malting floors, of which Bowmore has two.  Bowmore is one of only a handful of distilleries in Scotland that continue to operate such a facility.  The malting floor is the area of a distillery where the malted barley was produced.  This is now most commonly produced by commercial malting facilities.  Bowmore produces about 25% of its own malt with the rest coming from Simpsons of Berwick-upon-Tweed.


During malting the barley is tricked in to growing and this converts starch in to the soluble sugars which are required in the whisky making process.  At Bowmore, this begins with the barley being soaked for 27 hours in cold water.  This increases the moisture content in the ground to 42% and this is then laid out on the stone malting floor for seven days.  The grain is not touched for the first 24 hours.  This is to allow the temperature to rise to 17°C and this kick starts the barley to sprout.


The barley is then turned every four hours.  This stops the shoots knitting together as they begin to grow and also avoids the temperature getting too high and keeps it constant.  This was traditionally done using a flat shovel but is now completed using a large raking tool, which distributes the grains evenly.  After seven days the grain is known as 'green malt' and the level of sugars are as required to make whisky.


The final part of the malting process takes place in a kiln.  The kiln at Bowmore was not being used during our visit and David took us inside it.  First we went inside the area where the green malt is placed - the malt sits on a fine mesh and peat smoke is sent up from the oven area below.  This passes through the malt and it imparts the famous smoky flavour in to the grain. At Bowmore the malt is kilned for 60 hours, the first 18 of which are without peat, and it is turned by machine every four hours to allow even drying.


Next, David took us into the oven section of the kiln.  This was a dark and stuffy area.  It was special to look up at the kiln floor above that we had just been standing on.  Other than imparting the smoky flavours in to the malt, the main function of the kiln is to reduce the moisture in the grains to about 5%.  The peat used at Bowmore is cut from a local estate and is burnt to provide smoke rather than heat.  The grain absorbs more smoke when moist.

The malt from Bowmore and Simpsons both go through this process separately and the final PPM (Phenol Parts per Million - the measurement used to gauge the the level of smoke in the barley) is 26-30 PPM.  They are also milled separately and only mixed together before the mashing process.  This ensures consistency and at Bowmore they produce grist with 20% husk, 70% middles and 10% flour.


The copper domed mash tun has a capacity for eight tonnes of grist (the name given to milled malt).  This is made up of 5.5 tonnes from Simpsons and 2.5 tonnes produced by Bowmore.  The process of extracting the soluble sugars begins by adding 27,000 litres of warm water.  This is at 63.5°C and is mixed for three and a half hours. The tun is then drained and two further waters (totalling 13,000 litres and at 85°C, then 100°C) are added to extract as much sugar as possible.  The tun room was hot, humid and steamy.

Did you know?
The water used at Bowmore for malting, mashing and cooling is taken from the River Laggan, which is seven miles away.  This flows from the source to the distillery along a channel.  This uses gravity and was hand dug by distillery workers just over 200 years ago.


We then visited was the fermentation room, where the next part of the process occurs.  The room was striking with dark beams and wooden flooring.  Bowmore has six wooden washbacks, each of which is named after the six owners of the distillery since 1779, and each has a capacity of 40,000 litres.  This is the quantity of each run from the mash tun and the washbacks are filled at nine hour intervals.  The yeast is added and the fermentation time at Bowmore is 48 hours, after which time the liquid (called wash) is around 8% ABV.


At the far end of the fermentation room was the still room.  This houses two large wash stills, where the first distillation takes place, and these have a capacity of 30,940 litres.  These work alongside the two smaller spirit stills, which have a capacity of 14,750 litres and is where the second distillation takes place.  The 40,000 litres of wash produce 4,800 litres of Bowmore spirit.  This is collected through the spirit safe, which was installed in 1923, at 69% ABV and is reduced to 63.5% ABV for casking using the village drinking water.


Next we were in for a real treat.  David took us in the famous No.1 Vaults - this is the oldest maturation building in Scotland and is the only original building from 1779 that remains.  It is also the only warehouse in Scotland that is below sea level and the outer wall backs on Loch Indaal.  Most Bowmore is matured on the mainland but very special casks are kept in Warehouse No.1.  Due to the position and climate of Islay, and Bowmore in particular, the rate of evaporation (or 'angel's share' as it is known) is very low at about 1-1.5% per year.


Inside No.1 Vaults it was dark and damp, and the atmosphere was heavy with the whiff of oak and maturing whisky.  The walls were covered in lichen and showed the age of the place.  Around 70% of the Bowmore stock is maturing in bourbon casks and 30% in Sherry casks.  We were in for one final treat as David popped open a couple of casks and we sampled whisky from each - a bourbon cask filled in 2000 and an Oloroso cask filled in 1997.  We also sampled the new make spirit.  It was the perfect end to a great visit.

Distillery tour information
The visitor centre is excellent at Bowmore and has won many awards.   The centre includes a shop, a tasting room that overlooks Loch Indaal and a restaurant.  They operate numerous types of tours ranging from the Standard Tour for £6 per person up to the Craftsman's Tour for £55 per person.  A full list of tours and visitor centre opening times - www.bowmore.com or telephone 01496-810441.


posted by Whisky For Everyone at 8:32 PM

eToro is the #1 forex trading platform for beginner and professional traders.