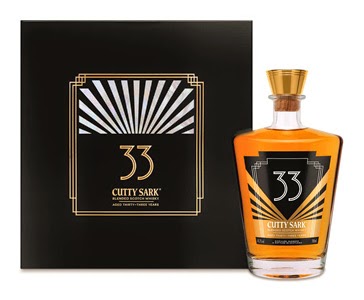 This whisky is the new limited edition expression from the famous Cutty Sark brand.  It has been created by Kirsteen Campbell, the Cutty Sark Master Blender, and is the follow up to 2011's award winning Tam o'Shanter 25 years old edition.  This blend has a minimum age of 33 year old whiskies used in the recipe and is named the Art Deco Edition.  The design of the packaging is inspired by the art deco period, when the brand was born, and features a bespoke bottle and label, a piano black wooden box, two commemorative glasses and a special book about Art Deco design.

The Cutty Sark brand was created in March 1923, allegedly following a lunch between the owners of the famous London wine and spirits merchants Berry Brothers & Rudd (Francis Berry and Hugh Rudd) and Scottish artist James McBey. It was named after the Cutty Sark, the famous tea clipper, and legend has it that McBey started drawing the logo of the boat on a napkin.

The brand was aimed at the export market and during the post-Prohibition era in America it rapidly grew to become the best selling Scotch whisky there. Cutty Sark remains one of the biggest selling whisky brands in the USA and across the world, and is currently owned by the Edrington Group.

This new limited edition release sits alongside a core range of blends which features the core Yellow Label, the recently added Storm and a series of age statements at 12, 15, 18 and 25 years old.  The Art Deco Edition is bottled at 41.7% ABV and there are just 3,456 bottles.  It is available globally in specialist whisky retailers and the recommended price is £650 a bottle.

Our tasting notes
The colour is a deep golden yellow with a hint of amber.  The nose is immediately intense and rich with aromas of caramel, raisins and dark chocolate to the fore.  With time there are further notes of golden syrup, honey, dried tropical fruits (think of dried pineapple, mango and peach), warming earthy spices (especially ginger and cinnamon) and hints of bitter orange and cocoa.  It feels very elegant and luxurious.

On the palate it takes the elegant luxurious nature to the next step.  The mouth feel is velvety, creamy and soft, but the flavours pop and remain vibrant throughout.  This is not always the case in older whiskies.  The initial notes of juicy peach and caramel are balanced by warming wood spices, including cinnamon bark and nutmeg.  Then come the dried pineapple, dark chocolate and candied orange peel notes from the nose.  Understated dark raisins and dates then mingle with some earthy ginger in the background.  There is also a distinct walnut note that comes through, as does a hint of milky coffee.  The faintest whiff of tobacco smoke adds even further depth.

The finish is long and expressive.  The earthy and woody spices seem more prominent, as does the hint of tobacco smoke from the palate.  This is especially true once the sweeter and fruity elements begin to slowly fade.  The result is a slight and pleasant dryness.

What's the verdict?
This is a classy and composed whisky that combines a complex series of subtle notes superbly.  Nothing overpowers and the balance is exceptional. The sweetness and spiciness is delicious, with depth of character being added by the significant age of the whiskies used to create the blend.

You could sit and smell it for ages if you have the will power not to take a sip.  This is one of the best whiskies that we have sampled for a long time and demonstrates the art of blending at its very best.  We would definitely be buying a bottle if we had £650 right now.

I like Cutty Sark but 650 pounds seems a bit much for a 33 year old Blend.

A great review, guys. We found similar things going on from the looks of it. I agree, an immensely well-put-together whisky with some delightful notes to it. A very different way of doing older Scotch, too, which is great to see.
The price point is beyond me but it's certainly better value than some 30-odd-year-old malts I could name.

If you want your ex-girlfriend or ex-boyfriend to come crawling back to you on their knees (even if they're dating somebody else now) you must watch this video
right away...

(VIDEO) Get your ex back with TEXT messages?