Benromach - New malt
The small independently owned Speyside distillery of Benromach, which is based in Forres, has announced a new addition to its core single malt range.  The 15 years old expression is designed to show what single malt used to be like in the post war years and this is aided by the distillery's boutique manual approach to whisky making, which has not really changed since that period.  It will be available in selected specialist retailers with a recommended price of £48.99 a bottle.

Ewen Mackintosh, Chief Operating Officer of Gordon & MacPhail, the owners of Benromach, said: “The Benromach story is a remarkable one, and the launch of the 15 years old marks a significant milestone in the distillery’s history. The whisky has a great deal of character and we hope it will appeal to whisky lovers who have tried other Benromach single malts and to those who would like to see what a classic pre-1960s Speyside malt is like.” 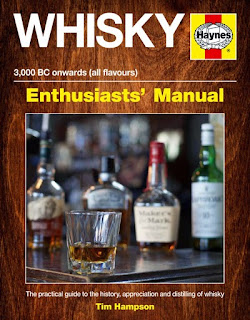 The classic series of 'how to' manuals by Haynes has a new addition to its library - the Whisky Enthusiasts' Manual.  The new book, written and collated by the award-winning author Tim Hampson, is designed to appeal to the ever-increasing new army of younger whisky drinkers.

The manual applies the unique Haynes treatment to the spirit and looks at numerous aspects including the journey of whisky from raw ingredients to the glass, food and whisky matching, case studies of selected distilleries, cultural aspects and the story of whisky around the world.  There is also advice for those contemplating starting a whisky collection.  It has just been published and is now available for a recommended retail price of £22.99.

Author Tim Hampson said: "Though whisky has traditionally been regarded as a tipple for the older generation, in recent times more young people have become fans of this well-established drink. This trend is likely to have been boosted by the fact that there is now a great deal of interest in new whisky makers in the UK, Ireland and the US. While once there was just a handful of large companies dominating the marketplace, now there are many new, smaller companies in operation."

posted by Whisky For Everyone at 1:36 AM