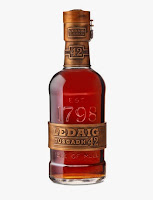 This new whisky is the oldest ever bottling of the Ledaig single malt from the Tobermory distillery.  Ledaig (pronounced lay-chuck) is the name given to its smoky/peaty spirit and it is only produced for approximately four months each year.  For the rest of the year, the regular non-peaty Tobermory spirit is made.  This new 42 years old is named Dùsgadh (which translates as 'awakening' from Gaelic) and the spirit was distilled and casked in 1972.  Older versions of Ledaig are rare as Tobermory was closed for much of the late 1970s, 80s and early 90s.

Tobermory is located in the town of the same name on the island of Mull, which is the UK's 4th largest island and lies just off the west Highland coast of Scotland.  It is the only distillery on the island and was founded in 1798 by John Sinclair.  Ledaig (meaning 'safe harbour' in Gaelic) was the original name.  The name was only changed to Tobermory in 1979 when new owners rescued the ailing distillery.  It is currently owned by Burn Stewart Distillers, which is part of the larger South African-owned Distell Group Ltd who took control in 2013.  The current production capacity is one million litres per year.

The whisky is non chill-filtered and bottled at 46.3% ABV. There will be just 500 bottles spread across selected specialist whisky retailers and in selected markets including Asia, North America and the UK. The recommended retail price is £3500 per bottle.

Our tasting notes
The colour is a deep amber, almost red, and the nose is incredibly vibrant and fresh for such an old whisky.  There are a splendid mix of aromas with plenty of toffee, caramel and red apples leading the way.  These are backed up by a complex mix of earthy smoke, wood spices (especially cinnamon), crystalised ginger, waxy furniture polish, candied lemon peel and hints of liquorice and orange.

On the palate, this whisky is equally as complex.  It feels rich and mouth coating with a candied orange and lemon note, which is almost marmalade-like hitting first.  This gives way to fruity and sweet notes, which are most reminiscent of apricot jam, dried figs, toffee and caramel.  The smoke from the nose is much more evident on the palate.  When it arrives it has a bittersweetness that dries everything out.  The smoke has a warming earthy, slightly charred and acrid feel.  The depth is amazing and extra dimensions keep appearing, even after a significant time.  The waxy furniture polish (possibly beeswax), soft background wood spices (especially cinnamon and clove) and a hint of ginger are the most notable.

The finish is long, drying and savoury especially once the fruity and sweeter elements disappear.  A complicated mix of orange bitters, nutmeg and earthy/ashy peat smoke take over and dominate.  The result is a whisky that hangs on to the taste buds and evolves over a significant amount of time.

What's the verdict?
This is a superb whisky and one that we feel privileged to have sampled, especially given its age and rarity.  The depth and complexity of the aromas and flavours are extremely well balanced, plus the level of smokiness has been impressively maintained over its four decades of maturation.

Rarely have we tasted a peaty whisky of this age that has achieved this.  With so few bottles around and the big price tag only a handful of people will get to try this, which seems a shame.

posted by Whisky For Everyone at 7:45 PM

eToro is the #1 forex broker for beginning and full-time traders.