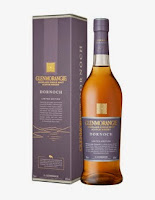 The Dornoch is a single malt from the famous north Highland distillery of Glenmorangie and is exclusive to the travel retail sector.  It has been designed by Dr. Bill Lumsden, Glenmorangie's Director of Distilling & Whisky Creation, and combines whisky matured in first-fill ex-bourbon casks and ex-Amontillado sherry casks.  The name refers to the distillery's location on the banks of the Dornoch Firth, a large sea inlet and estuary.  Glenmorangie have partnered with the Marine Conservation Society for this release to assist with preservation of the Firth.

The Dornoch is bottled at 43% ABV and is available in travel retail outlets worldwide.  It was launched back in November 2014 and is pitched as a limited edition.  Exact numbers are not mentioned in any supporting literature.  The recommended retail price for a 70cl bottle is £60.  The video below shows Dr. Bill Lumsden explaining the inspiration that aided his creation of the Dornoch.


Our tasting notes
The colour is golden yellow and the nose is bursting with vibrant notes of crisp green fruits (think of pears and apples), honey and sultanas.  Then come softer aromas of fudge and toffee, then a distinct slightly dusty earthiness and finally some candied lemon.

On the palate it is the sultana and honey notes from the nose that dominate to begin with.  It feels a little oily in the mouth and coats the taste buds.  Further notes of fudge and butterscotch follow, which adds a pleasant sugary edge that is most reminiscent of crumbly brown sugar.  Then comes a distinct bittersweet malted cereal element.  The green fruits, particularly the apples, are also present.  These seem less crisp than on the nose and have more of a stewed quality.  This is heightened by some warming cinnamon, clove and liquorice.  A late whiff of unexpected earthy peat smoke and candied lemons add further depth and complexity.

The finish is warming and of decent length.  The fruity and sweet fudge-like notes fade to leave the earthy, smoky, malty and spicy elements - this adds a lovely dryness that lingers and develops for ages.  A late hit of ginger finishes things off well.

What's the verdict?
The Dornoch is an enjoyable whisky that presents the classic Glenmorangie characteristics but with a bit of a twist.  The use of some lightly peated spirit and the ex-Amontillado sherry casks, which are rarely used for whisky maturation, have provided that twist.  These have added an extra robustness and the result is a very good whisky.

It is well worth searching out next time you are passing through an airport, especially as it is at a decent price.  It is also good that Glenmorangie are donating  something from the sale of each bottle to the Marine Conservation Society.

I'll bet this whisky really opens some doors! Sorry, it was the best I could do in short notice!

I really need to try more Glenmorangies. Even some of the main range I have not got a chance to sample. Something to put on the to-do list (to-taste list?).
Keep on waffling,
Nick