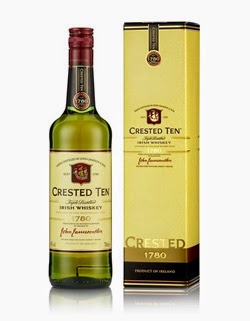 The Crested Ten is a blended whiskey in the Jameson range.  It enjoys a cult status as it is highly regarded but with a relatively small distribution.  Crested Ten has a higher amount of single pot still whiskey in the blend (this is rumoured to be about 60%) compared to most other Jameson expressions.  The other 40% is made up of Irish single grain whiskey.  These are aged longer than the regular Jameson blend and have a higher proportion of ex-sherry cask matured whiskey included.

Jameson is the biggest selling Irish whiskey brand in the world with over 30 million bottles sold every year and it is currently made at the Midleton distillery in Co. Cork.  This was built in 1975 to replace the old Bow Street distillery in Dublin, which is now the brand's visitor centre.  This had been founded by John Jameson in 1780 but was no longer able to keep up with the increased consumer demand. The recently expanded Midleton distillery makes both single grain and single pot still whiskeys and the combined capacity is a huge 64 million litres per year.  The whiskey is used to produce Jameson plus popular Irish brands such as Green Spot, Midleton, Paddy, Powers and Redbreast.

The Crested Ten was the first ever expression to be bottled by Jameson in 1963 and heralded the beginning of the Jameson empire as we know it today.  It is currently only available in Ireland to our knowledge (we purchased ours in the travel retail store at Dublin airport) and is bottled at 40% ABV.  In addition, a couple of UK online whisky retailers also have it listed.  A bottle should cost about €30 or £40.

Our tasting notes
The colour is vibrant gold and the nose is full of delicious sweet and fruity aromas - think of honey, vanilla and stewed fruits (especially pears and peaches).  Underneath are further aromas of cereals, cinnamon, ginger and apricot jam, along with something slightly damp and earthy.

On the palate the whiskey feels creamy and soft, almost buttery, and coats the mouth.  The viscous nature seems to exaggerate the notes shown on the nose, especially the sweet and fruit ones.  There is a distinct honey-like characteristic that continues as other notes develop.  Vanilla is also very prominent and this tends towards a vanilla custard with time.  These are complimented by a juicy stewed fruitiness with peach and apricot to the fore.  The combination is superb, especially once some warming wood spices (think of fresh oak shavings and cinnamon, maybe a pinch of nutmeg).  There is a late hint of white chocolate that adds to the creaminess and sweetness.

The finish is luscious with the sweet fruitiness, and the vanilla custard and apricot notes in particular, lingering for ages.  As they fade, the cereals and wood spices become increasing influential and add a pleasing depth and warmth.

What's the verdict?
The Crested Ten is a lovely whiskey.  We like the regular Jameson expression, but this is a definite step up in quality and that makes it worth spending a few extra pounds.  It has a creamy velvety mouthfeel and is full of sumptuous sweet and fruity flavours, which are tempered by some drying warming spice.  A really good Irish whiskey and one that is well worth hunting down.  Delicious.

Does anyone know where the name Crested Ten came from or what it refers to?  We could not find any answers during our research ....