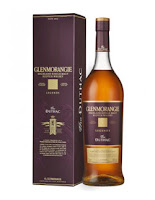 The Glenmorangie Duthac is a new single malt that is exclusive to the travel retail sector.  It is the first of the new Legends Collection series and each will pay homage to a local Highland legend.  Duthac refers to the shrine of St. Duthac, the patron saint of Glenmornagie's home town of Tain.  The whisky has been been constructed using ex-bourbon cask matured spirit by Dr. Bill Lumsden, the Head of Distilling & Whisky Creation at Glenmorangie, and combined with whisky part-finished in ex-Pedro Ximenez sherry casks and charred virgin oak casks.

The Duthac is bottled at 43% ABV and is available now in leading airports across the globe.  A one litre bottle will cost £55/€75.  Further expressions of the Legends Collection are planned for release over the next 18-24 months.  Below, Dr. Lumsden explains about Duthac and the inspiration behind it.


Our tasting notes
The colour is a deep golden amber and the nose has plenty of interesting aromas.  There are immediate notes of dark dried fruits (think of raisins and prunes) followed by sweet golden syrup and treacle aromas.  These are backed up by background hints of cocoa, dried fig, cinnamon and something nutty that is most reminiscent of walnuts.

On the palate the whisky feels viscous and has an initial sugary sweetness.  This tends towards crumbly brown sugar and then evolves in to more complex toffee, caramel and dark treacle notes.  Then come the dark dried fruits from the nose - raisins, prunes, figs and a hint of tangy candied orange peel, dried fruits, orange peel - and vanilla.  These are followed by plenty of warming wood spices especially clove, cinnamon and some earthy ginger.  Further depth is added by hints of cocoa powder, red cherry and malty cereals.

The finish is again initially sweet and quite sugary with the raisins and toffee particularly prominent.  Then the darker black treacle note starts to come through to take things in a more bitter direction.  This is accentuated by some drying and warming cinnamon and oak notes.

What's the verdict?
This a lovely and easy drinking new expression from Glenmorangie.  Those familiar with their whiskies will find it much richer, sweeter and more robust than almost anything else in the range, bar the Signet.  Definitely worth tasting and buying as you travel through an airport next time.  It will be interesting to see what the other forthcoming whiskies in the series will offer.

Much ado about nothhing... absolutely ordinary taste , a let down ! I could not discover any aromas or taste promised by Glenmorangie PR...

If one prefers a smoky finish to their drink, they probably will not like this. For everyone else, there is the Glenmorangie Duthac. I have been drinking single malts for close to 35 years. and it would be no exaggeration to say this is one of the best I have had. It is exceptionally smooth in true Glenmorangie fashion, yet adds very interesting flavours to produce a final result that is in essence a truly special whisky