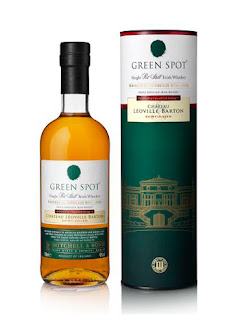 This new expression of the cult Green Spot whiskey has been finished in ex-Bordeaux red wine casks from the Château Léoville-Barton, a grand cru winery in the Saint Julien appellation of Bordeaux. Château Léoville-Barton is currently owned by Anthony and Lilian Barton, who have Irish ancestry dating back to the 1700s. The whiskey has been matured in a mix of ex-Oloroso, ex-bourbon and new bourbon casks before being transferred for 18-24 months to the ex-red wine casks.  The whiskey is bottled at 46% ABV and is available in a limited number of markets including France, Ireland and the UK.  The recommended price is £43/€59.

Green Spot gets its name from the coloured marks that were traditionally painted on the end of the maturation casks during storage by Mitchell & Son, the Dublin wine merchants and brand owners. This denoted the age of the casks - a blue spot for seven years old, green for 10 years old, yellow for 12 years old and red for 15 years old.  Green Spot is a single pot still whiskey and this means that it is created using a mix of malted and un-malted barley that is then distilled in copper pot stills.

Mitchell & Son were founded in Dublin in 1805 and have a special historical arrangement with Irish Distillers Pernod Ricard to produce their whiskeys, which include the regular Green spot and the Yellow Spot. These are now made at the Midleton distillery in Co. Cork.  For further information about this new whiskey, the range and the other whiskeys in the Irish Distillers Pernod Ricard single pot still range - visit www.singlepotstill.com.

“Maturing Green Spot in the Château Léoville-Barton wine casks provided a fascinating assortment of characteristics on the nose and palate, which give way to a long finish reminiscent of the terroir in France and Ireland.”
Kevin O'Gorman, Master of Maturation at Midleton

Our tasting notes
The colour is a dark reddish brown and the nose has an instant and almost exaggerated aroma of honey lozenges, which is followed by vanilla and warming baking spices (think of cinnamon especially).  Then come candied citrus fruits, stewed red fruits and cranberry jelly, along with a hint of gingerbread and cocoa.

On the palate the whiskey has an immediate warm and spicy feeling.  This reveals plenty of oak, bittersweet cereals and cinnamon notes that give a dry edge.  It is stopped from being too dry by lovely sweeter and fruity notes that begin to develop - think of toffee, the honey from the nose and caramel in particular, along with a delicious note of candied oranges and lemons.  There is also plenty of vanilla, but this is exaggerated and more reminiscent of vanilla essence rather than pods.  Further depth and complexity is added by hints of stewed red fruits (imagine cranberry and raspberry compote).  The drying wood spices return towards the end.

This leads in to the finish, which as a result becomes quite dry too.  The sweet honey, toffee and fruit notes fade relatively quickly to leave the residual earthy ginger, bittersweet cereals, cinnamon and oak characteristics to fight it out.

What's the verdict?
The red wine cask finished whiskies that we have sampled in the past have been a bit hit or miss in our opinion.  This Green Spot is one of the better ones that we have tried.  The red wine cask influence is not too overpowering and adds depth, complexity and a number of delicious notes.  Green Spot is a cult classic Irish whiskey and this has taken it to a new level.  It is well worth purchasing if you can find it and seems to represent very good value for money vs. the quality of the liquid.

eToro is the #1 forex broker for rookie and professional traders.