Within Inbox we aim to write a few lines detailing each press release/piece of news/PR event that we have received and provide links, where possible, for you to find out further information. There are lots of new releases this week, so here is what has caught our attention ...

Booker's Bourbon - Busts a new batch
The small batch Booker's Bourbon has released the latest edition, named Batch 2015-04.  This has been bottled directly from the cask, as have the other three editions, and is at the natural cask strength of 127 proof (63.5% ABV).  The whiskey is named after Booker Noe, the legendary former Master Distiller at Jim Beam and father of current Master Distiller Fred Noe.  Fred selects each batch in his father's honour with the aid of a selected panel of experts.

Each release of Booker's Bourbon features a bespoke label and this one is nicknamed the Oven Buster Batch in memory of Booker's wife who once blew up their oven by pouring bourbon over a pork roast.  Batch 2015-04 will be available throughout the USA shortly and cost $59.99 a bottle.


Douglas Laing - Goes with the grain

The Scottish independent bottler of Douglas Laing & Co have announced that they are adding a selection of single cask single grain whiskies to their flagship Old Particular range.  The four whiskies in the first release - Cameronbridge 25 years old, Girvan 25 years old, North British 21 years old and Strathclyde 27 years old - have all been hand selected by Fred Laing, the Managing Director of the family owned company.  The single grain range will sit alongside the current Old Particular single malt range and all four bottlings, which are presented at their natural cask strengths, will be available shortly through selected whisky specialist retailers.

Fred Laing, commented: "Douglas Laing & Co believe the time is now to give this long under-rated sector far greater kudos. So within our Old Particular single cask flagship brand, we will now release selected antique stocks of different grain Scotch whiskies in a lively new livery which both differentiates it from the malts and also retains the character and specialised gravitas of the brand".

Famous Grouse - Mellows out a bit
The UK's best selling blended Scotch whisky has announced a new permanent addition to its core range - The Famous Grouse Mellow Gold.  The new blend has been created by Gordon Motion, the Master Blender for The Famous Grouse, and features a higher percentage of ex-sherry casks than the regular expression of The Famous Grouse in the range.  The bottling features a new packaging design and will be available from supermarkets and independent retailers in the UK from October.  A bottle will cost £22.


Kingsbarns - Gets into the spirit 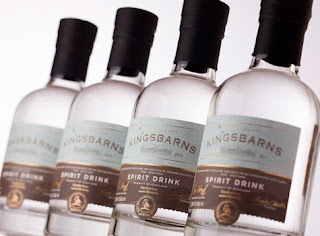 One of Scotland's newest single malt distilleries, the Kingsbarns distillery in Fife, is giving whisky fans the opportunity to sample its new make spirit.  The distillery, which only began production in January of this year, has taken the decision to showcase the quality of their spirit as there is a long three year wait before any of it can legally be called whisky.  The New Spirit Drink has been bottled at 63.5% ABV, the same strength as it is filled to cask, and will cost £14.95 for a 20cl bottle.  It can only be purchased at the distillery's visitor centre at this time.

Peter Holroyd, the Distillery Manager at Kingsbarns, commented: "It's a great pleasure to share our new spirit with visitors. The spirit itself is an elegant, fruity and floral spirit and I can't wait to see how it is going to develop into Scotch whisky over the coming years. I recommend that water is added to enjoy the fruity flavours at their best."


posted by Whisky For Everyone at 7:38 PM