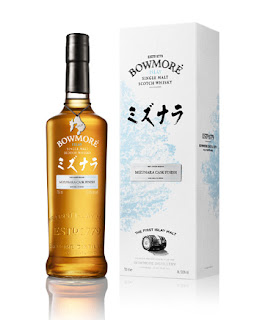 This new release from the Islay distillery of Bowmore offers something genuinely unique - a Scotch single malt that has been matured in Japanese mizunara oak.  This is the first whisky of its kind and stems from the fact that Bowmore is owned by Beam Suntory, the biggest whisky producer in Japan.  Mizunara oak is rare and only grows in northern Japan and small areas of China and Russia.  Trees are very slow growing and take 200 years to reach full size.  Because of this Beam Suntory only make around 100 such casks per year and runs a sustainability programme to replant saplings for future generations.

Bowmore is the oldest distillery on the Hebridean island of Islay and one of the oldest distilleries in all of Scotland. Only Glenturret in the Highlands is older of those that are still in operation. Bowmore was founded in 1779 by John Simpson and is owned by Morrison Bowmore, who have been in control since 1963, which is now part of the larger Beam Suntory drinks company.  The distillery sits in picturesque surroundings on the shore of Loch Indaal

Bowmore is one of only six distilleries in Scotland to malt its own barley on a full-time basis and the annual production of the distillery is two million litres. The core range is extensive and expands across local and travel retail markets – this helps to make Bowmore one of the biggest selling single malts in the smoky/peaty style.  Last year we took a tour around Bowmore with David Turner, the Distillery Manager - to read more about Bowmore and our visit click here.

The Bowmore Mizunara Cask Finish is limited to just 2,000 bottles and these will be distributed between selected key markets.  The majority of the whiskies included were initially matured in ex-bourbon casks and a small percentage were in ex-sherry casks.  These were hand selected by David Turner and were all distilled in the 1990s.  They were then transferred to virgin mizunara oak casks for a further three years.  It is the first time that mizunara casks have ever been exported out of Japan.   It is bottled at the natural cask strength of 53.9% ABV and the price will be £650.

Our tasting notes
The colour is a bright golden yellow and the nose is vibrant, fresh and spicy.  The initial aromas are a elegant mix of vanilla, gentle peat smoke and tropical fruits (think of pineapple and mango).  These are backed up by more subtle aromas of candied lemon and plenty of cinnamon, plus hints of cocoa and cloves.

On the palate the whisky has an initial vibrancy and freshness, which is exaggerated by the high ABV.  The wood spices, especially oak and cinnamon but also mace and cedar wood, are particularly prominent and are supported by earthy peat smoke.  This smoke seems more punchy than on the nose and evolves to become softer and more floral.  The whisky softens with time in the mouth and there is plenty of sweetness and fruitiness that add balance to the smoke and spice, plus depth and complexity.  There are notes of honey, vanilla and golden syrup and these are backed up by dried tropical fruit (especially mango) and lemon zest, plus hints of fresh lychee, cocoa powder and menthol.

The wood spices and smoke slowly fade to leave the fruity and sweet notes to the fore.  This gives the whisky a long, complex and sumptuous finish with a delicious mix of candied citrus, dried mango, vanilla and honey.

What's the verdict?
The Mizunara Cask Finish is a sublime single malt and easily one of the best new releases of 2015 to date.  It is simply superb, oozes class and demonstrates how good older smoky whiskies can be.  It has incredible depth and complexity and takes water very well - this knocks back the spices, makes the whisky more velvety, accentuates the tropical fruit notes and gives the smokiness a floral edge.  One dram at the world launch was not enough ...

This is a luxury, premium and limited edition single malt that has been priced by the producer accordingly.  It may seem expensive to some but let's look at what you are getting for your money - 1) a truly innovative single malt, 2) whiskies included are of mixed ages 16-25 years old, 3) finished in a very rare type of cask that has never been transported out of Japan, 4) bottled at cask strength and 5) only 2,000 bottles ever.  Each one of these five aspects increases the price of a whisky in the real world, so the final price was not a surprise to us.

did Bowmore offer you a job already? Nice piece of marketing anyway.

There are 7 distilleries in Scotland operating their own maltings...3 on Islay, 2 in Speyside, 1 in Orkney and 1 in Campbeltown.

Do you really believe this? "This is a luxury, premium and limited edition single malt that has been priced by the producer accordingly." Accordingly?!
How in earth can someone justify €1000?
If you would like to share the press release, it is fine by me.
But please do not pretend that you are only tasting the dram at least.
Since you are close to marketing people from Bowmore, could you please ask them a simple question: Why have they used ex-Yamazaki Mizunara Casks? (Ref: Nonjatta).
Greetings,
ViskiPerver