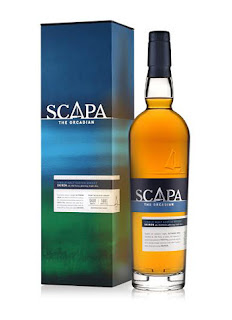 Skiren is the new single malt expression from the Scapa distillery on the Orkney islands. The islands have a rich Nordic heritage and the name of this new whisky plays on this - Skiren translates as 'glittering bright sky' from the old Nordic language.  It has been been exclusively matured in first-fill American oak casks.  The Scapa distillery is located close to the village of St. Ola and close to Kirkwall, the capital of the Orkney islands. It is the second most northerly distillery in Scotland and misses out on first place to nearby Highland Park, which is just half a mile down the road.


Scapa was founded in 1885 by Macfarlane & Townsend and is currently owned by Chivas Brothers, which is part of the larger Pernod Ricard company.  It is a small distillery that produces just over one million litres of whisky a year and the only one in Scotland that has a Lomond wash still, a type of still containing perforated plates to give greater control on the reflux action of spirit.  Scapa also has the longest known fermentation time of any Scotch whisky distillery at 160 hours.  Much of the production is used within Chivas Brothers' blended whisky ranges, including Ballantine's and Chivas Regal, with just a small percentage released as Scapa single malt.

"Scapa Skiren is a product of our island; forged by the elements and the expertise of our dedicated team who use traditional methods and skills honed over several generations."
Brian MacAulay, Master Distiller at Scapa.


Scapa Skiren is bottled at 40% ABV and it will be released to selected retailers in September and will initially appear in France and the UK. A bottle will cost around the £40/€55 mark. Skiren joins a 16 years old expression in the core range, although rumours are circulating around the whisky blogosphere that this is to soon be replaced by a 14 years old.

Our tasting notes
The colour is golden yellow and there are immediate clean and sweet aromas of crisp green apples, toasted nuts and candyfloss. Underneath are further aromas of vanilla, honey and freshly made popcorn - this note in particular adds a slightly odd edge to proceedings.  A background whiff of aniseed is also interesting.

On the palate this has a vibrancy that takes time to settle to something softer.  There is a large hit of tangy green apples and vanilla first up, which then begins to reveal other notes such a sweet honey and soft wood spices (think of cinnamon and mace in particular).  The sweet notes keep on coming in the form of the candy floss from the nose and some fudge/toffee.  These threaten to become too sweet and sugary, especially when some icing sugar characteristics begin to appear, before some bitter sweet cereals and toasted nuts (especially almond and walnut) add balance.  Hints of aniseed, bitter chocolate and over ripe banana round everything off.

The finish is quite short and sweet - the sugary notes fade quickly to leave the wood spices, cereals and nutty characteristics to linger.  This gives the finish a slight drying and warming edge.  These are joined by an interesting white chocolate note very late in proceedings.

What's the verdict?
This is a light, fresh whisky that compliments the heavier and richer 16 years old expression in the range.  It is in danger of being too sweet but this is kept under control by the bittersweet cereals, the wood spices and toasted (almost burnt) nut characteristics.  It is interesting but with one or two elements that may not appeal to all tastes.  Well worth a try and we also think that Skiren is reasonably priced at £40.

posted by Whisky For Everyone at 9:06 PM

Good review - exactly how I would have described it :) I bought this one and went out and got another one. It was borderline on the sweetness but worked.