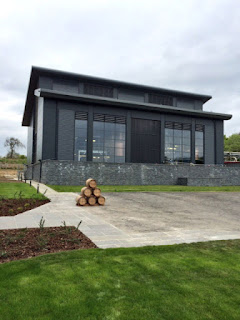 Inchdairnie is a new single malt distillery located in the Lowlands region of Scotland. The distillery is the brainchild of Ian Palmer, a whisky industry veteran with almost 40 years experience, who decided that he wanted to produce and launch his own high quality single malt. He founded Inchdairnie’s parent company John Fergus & Co. Ltd in 2011. Construction began in July 2104 and was completed within 18 months. Production began in December 2015.

Inchdairnie is built on a seven hectare site on the outskirts on Kinglassie in Fife. The land historically belonged to Inchdairnie House and the name is a combination of two Fife Gaelic words – Inch meaning low lying land close to water and Darne meaning a secret or hidden place. The distillery is part of a revival of the Fife whisky industry, which used to sustain more than ten distilleries until the 1920s.

The striking architecture incorporates a contemporary design and some of the most up-to-date and energy efficient working methods. The distillery will not be open to the public and contains no visitor centre or facilities but we were invited to an official media opening last month. Our tour was conducted by Scott Sneddon, the Distillery Manager, who has previous experience of at a number of Diageo malt distilleries.

We began with a walk around the exterior of the distillery and this allowed Scott to explain about and show us all of the utilities and services. These are housed to the left of the main building as you look at it head on and include gas, electricity and water. The water used at Inchdairnie comes from two natural springs on the property – the Flowers of May and Goat Milk Hill - although this can be topped up from the main water supply when required.

"We have built a modern distillery for the modern age"
Scott Sneddon - Distillery Manager at Inchdairnie.


Everything at Inchdairnie has been carefully considered to be as eco-friendly and energy efficient as possible, but while producing maximum yields.  This means that the distillery was designed by one company as a whole rather than individual components fitted together in the traditional way.  The result, created by Italian engineering company Frilli, results in the use of less energy and less water. 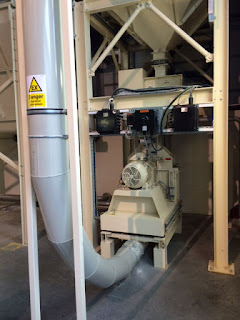 The first evidence of this is the mill, which is located immediately inside the main distillery building.  This is a hammer mill and this pulverises the malted barley in to a much finer grist than normally used in whisky production. Inchdairnie are using the traditional Spring variety of barley, plus rarely used Winter varieties, and all is sourced from within Fife.

The malt is stored in a 60 tonne silo to the rear before passing through the hammer mill and being turned in to a fine flour.  This consistency would cause a problem in a regular mash tun at a whisky distillery, as the mash would become too thick when water was added. 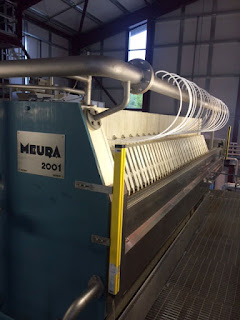 To tackle this issue Inchdairnie have installed a mash filter instead of the traditional mash tun.  This device is composed of a series of filters (22 in total) to squeeze the sugary liquid from the thicker mash.  This equipment is more commonly used in the brewing industry, but one other Scotch single malt distillery uses the same equipment - Teaninich in the north Highlands.

A mash filter gives more extraction of natural sugars from the malt.  It works by compressing mash twice between meshed membrane sheets to produce the wort, in a similar way to squeezing a tea bag.

The fermentation takes place in four large washback tanks located outside of the main distillery building.  These hold a combined total of 60,000 litres of wort.  The yeast used to create fermentation was specifically developed for Inchdairnie in conjunction with Mauri and contains a number of strains.  The final wash is above 10% ABV, which is higher than many other whisky distilleries, and this gives extra flavour to the final spirit. 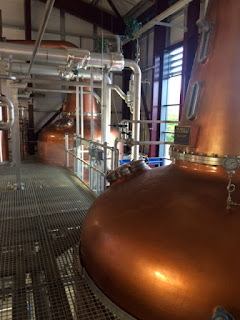 There is one pair of stills - one wash and one spirit - and these are working close to their two million litre per annum capacity already.  The Italian-made stills feature the thermal vapour re-compression method.  This sees the vapour undergoing condensation twice, which increases copper contact with the vapour and spirit and is 40-50% more energy efficient that a regular still condenser.  Only two other Scotch single malt distilleries use this system - Glen Ord and Teaninich.  They have also installed a Lomond Still, although this is currently being tested and expected to be on line by July.

Since the production began in December they have been making two types of spirit, one named Inchdairnie and one named Strathenry.  Both are cut at higher than average ABV (Inchdairnie at 72.1% and Strathenry at 71.2%) and both are currently being filled to ex-bourbon casks.  Experimentation of other cask types is planned for the future.

Inchdairnie will become the signature single malt of the distillery and be released when it reaches a suitable maturity.  Scott suggested this would be a minimum of 10 years, so we have a long wait.  The Strathenry will be sold for blending to other companies, primarily to project partner Macduff International, to bring in earlier revenue.  Strathenry and Inchdairnie will be produced at a ratio of 2:1. 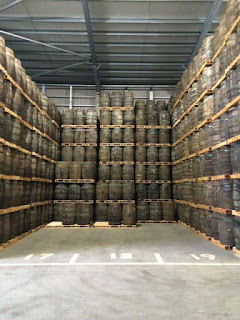 We moved to see inside one of the two large warehouse that are currently on the site.  As the distillery is running close to full capacity already an impressive 1,465 casks had been filled up to our visit date since December.  The casks are stacked high, end on end and on pallets.  It was an impressive sight and smell that greeted us.  Each warehouse is designed to hold 44,000 casks each, so these initial casks are the tip of an ever increasing iceberg.  A further seven warehouses are proposed on the site and this gives an incredible sense of the scale that Inchdairnie will be able to achieve.

Inchdairnie goes against the grain of most new single malt distilleries that have opened or are being proposed in Scotland in recent years.  This is no small 'craft' type place that uses traditional methods and insists on weaving tourism or a hipster gin bottling in to fabric of its business plan to make initial revenue.  This is a full on working distillery that is there to make whisky, and lots of it.  We like that approach.

The way it combines traditional whisky making with modern eco-friendly technology and techniques from other industries is impressive.  Inchdairnie really shows how to create a large scale distillery from scratch and get it producing decent quantities of spirit immediately.  We will have to wait a long time to try any bottlings from there, but again we like that - there is no rush or quick buck needed.  We wish them every success and thank Ian and his team for their hospitality.

posted by Whisky For Everyone at 8:48 PM

Hey,
what do you think of visiting the Glenlivet distilery?