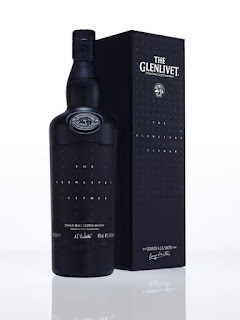 The Glenlivet Cipher is a new limited edition single malt from the famous Speyside distillery, but it is one with more than the usual sense of intrigue.  The Cipher has been released with virtually no information attached except the legally required alcohol strength of 48% ABV.  This is similar to the Alpha release of three years ago.  There are no tasting notes, no details of cask types or maturation (other than it is a unique combination never used for The Glenlivet before), no age statement and no indication of colour or style due to the striking black opaque bottle. The bottle and packaging give clues of flavour and aroma but little else.

The Glenlivet distillery is located in the Speyside region, close to the town of Ballindalloch in the scenic Livet Glen. It was founded in 1824 by George Smith, whose signature still appears on the labels and packaging.  The distillery was the first in the Speyside region to be granted a distilling license under the Parliamentary Excise Act, which was brought in one year earlier.

The Glenlivet is now one of Scotland's largest distilleries with an annual production of 10 million litres and is currently owned by Pernod Ricard, who took control in 2001.  It also became the biggest selling Scotch single malt in mid-2015, when it finally overtook long-time leader Glenfiddich. 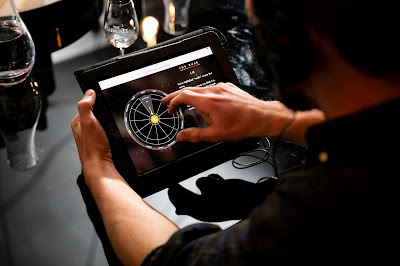 The unique thing about the Cipher release is an interactive digital element connected to it.  This allows you to determine and create your own tasting notes after sampling the whisky.  By visiting cipher.theglenlivet.com and then creating your own aroma and flavour profiles really gets you to analyse the whisky both on the nose and palate. Do not worry as Alan is on hand with useful short videos to assist you with some tips.

Once you have chosen your six aroma and flavour characteristics, the results are collated into a graphic cipher and your selections compared to those of Alan to reveal how close you are. You can then share across various social media platforms using #TheGlenlivetCipher and @TheGlenlivet.

The Glenlivet Cipher is available now from selected specialist retailers across 25 world markets including Canada, Taiwan and the UK. The recommended retail price is £85 or $US120.

Our tasting notes
The colour is deep gold with a hint of amber and the nose expresses a lovely mix of sweet and fruity aromas.  The combination of caramel and honey with fresh green apple and pear is very promising.  This is supported by further aromas of almonds and delicate malted cereals along with hints of treacle, boiled fruit sweets and cinnamon.

On the palate this whisky feels soft and luxurious.  The obvious sweetness and fruitiness from the nose is immediately evident and again manifests itself as a mix of honey, caramel and green fruits.  However these evolve to become more complex - the honey becomes honeycomb and combines with a hint of chocolate to be reminiscent of Crunchie bars, while the green fruits becomes more stewed and seasoned with cinnamon and clove-like spices.  Underneath is a further fruitiness with some dried pineapple and apricot present, along with a hint of dark treacle and gingerbread. A late hit of sugary fudge, bitter orange and something nutty round things off.

The finish is long and sweet, then drier and spicier as the sweetness goes.  The caramel and honeycomb fade first, then the green and tropical fruits.  This leaves a distinct malted barley note and the earthy and wood spices, especially the cinnamon and ginger, to linger.

What's the verdict?
The Cipher is a delicious whisky from The Glenlivet.  It has a lovely softness and richness to it and a good balance of the sweet and fruity flavours.  This makes it very easy drinking but with plenty of character and depth.  The lack of information only adds to the intrigue and natural curiosity makes you try to guess the composition of the casks for maturation.  Very nice and very enjoyable.

My personal score on #TheGlenlivetCipher challenge was terrible (48% - see below).  I think Alan's job is safe for a while longer ... The full details of Cipher will be revealed to The Glenlivet Guardians by Alan Winchester later in the year.  In the meantime, why not join in and create your own aroma and flavour profile at cipher.theglenlivet.com? 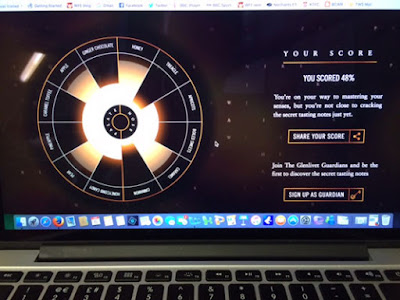 Supplying virtually no information about this whisky will make me take a pass. Glenlivet must think the customer will put up with this NAS nonsense.

No pass for me; tried it and loved it. The game is fairly commercial but fun to do, and only helps to improve the tasting experience. Apart from the game: a very good dram indeed, and worth a try.
With the game: a fun experience and a nice way to test your senses. At 66% on my first try, I wasn't disappointed....


The whiskey was quite good, the game is ridiculous. Bad marketing strategy.

I'm glad you mentioned almond because I had a strong taste of almond. I was surprised not to find it on the list. I only scored 38%, the almond threw me.

I like the concept, it encourages people, myself included, to put some thought into your senses.